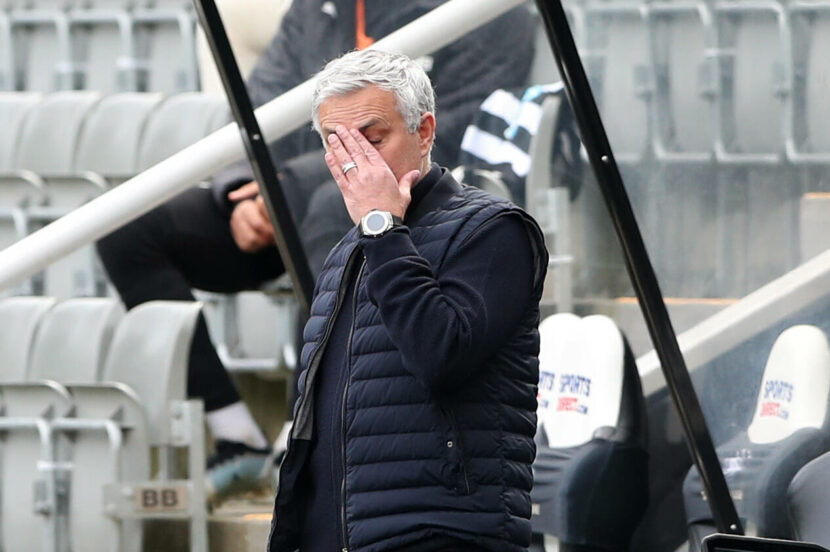 There’s much to criticise about Tottenham’s defence this season, who look very short of confidence at present.

Some excuses can be made with frequent chopping of the changing, allowing for no consistency, but this fails to justify why simple mistakes keep occurring.

Tottenham have dropped more points than any other from winning positions this season, a stat which alone could crush any defender’s confidence. But this confidence would have taken another blow after their manager has again thrown the team under the bus after last weekend’s draw with Newcastle.

Jose Mourinho has seemingly absolved himself from any blame for Tottenham’s defensive problems with his recent “same coach different players” comment. But if you delve into the stats, there’s an alternative way to look past the simple defensive mistakes and see the so-called Special One throw himself under his famous parked bus.

This season Tottenham have averaged 50.2% possession per game, the 10th highest in the league and a lower % than Brighton. In Pochettino’s final season at the club, Tottenham had the 4th highest average possession, with this the only time the average possession stat was outside of the top three. Tottenham were a side built on retaining the ball, which took pressure off the defence, and saw them concede far fewer goals; sometimes the fewest in the league.

Jose’s change in style has seen Tottenham look vulnerable, which the stats reinforce. He recently stated when his team has the ball, he already knows Hugo Lloris will end up with it, claiming this creates instability in themselves. But this is an issue Mourinho has caused.

There’s no confidence in the Tottenham defence to play simple forward passes, who more often than not are reduced to long balls, limiting the opportunity for Tottenham to work the ball into the penalty area. This has seen Sheffield United complete more passes into the 18-yard box than the Lilywhites.

It’s been about a quick turnaround under the Portuguese manager. Counter attacking football and then shutting up shop. His isolation of certain players has also not helped, with one, in particular, being Dele Alli. Someone who is comfortable with receiving the ball with his back to goal, he offers the defence a simple forward pass and lessens the need for the ball over the top, which has ultimately been misplaced.

You look at Manchester City and Ruben Dias. The defender has completed more passes than any other player in the league, who coincidentally plays for a team averaging the highest possession per game and has conceded the division’s fewest goals. Possession not only limits the chances the opposing team can create but builds confidence in the team.

Jose’s negative defensive approach has changed the culture of the club. No longer a free-flowing attacking side, but one which makes the fans flinch every time a defender is pressured on the ball. The long ball style that Dele Alli so eloquently criticised in the Tottenham documentary has created bad habits and increased opposing pressure.

Jose may be the same coach, but a coach who’s failed to adapt to the club he found himself in. He’s on the verge of changing a historic culture, with to dare is to do being replaced by long ball and hope.