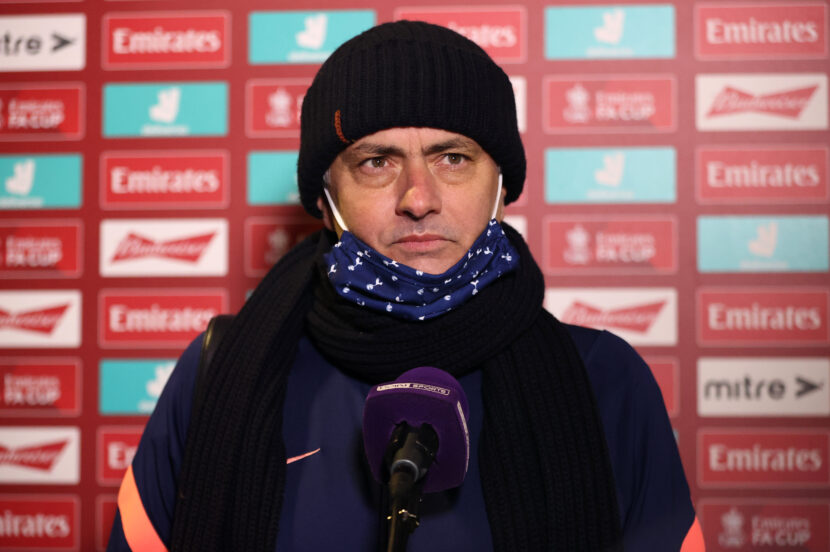 Some quick thinking and organisation means that Tottenham will still play in midweek – not against Villa but against Fulham, with the former unable to play due to a wave of coronavirus in the squad.

Spurs were due to play the Cottagers on the final day of 2020, but Fulham themselves had COVID problems in their camp and were forced to reschedule. Mourinho will likely embrace this idea, as it means less congestion further down the line for Tottenham. Playing Villa or Fulham, the target remains the same – Spurs will want nothing less than a win. With the Lilywhites seven points off the top of the table, a victory would hold them in a much better position to contend for the title – something many clubs are hoping to do in this bizarre season.

Spurs’ last two fixtures have been cup ties. The first was a relatively comfortable victory over a confident Brentford, which sent Mourinho through to the EFL final for a third different club. Five days later, history was made as Marine hosted Tottenham, a match representing the biggest gulf of league places ever in the competition’s 150-year history. Spurs played as well as expected and won 5-0, although Marine did themselves proud with some impressive interplay throughout.

Spurs have won all but one of all league match-ups between the two sides last decade, and with confidence on the rise again, another win against the Cottagers could prove to be important in preserving momentum. A few teams in the top of the table have begun to look much more potent, so Spurs will want to follow this trend and stay ahead of the opposition.

Fulham’s last league outing came way back on Boxing Day, with a nil-nil draw against the Saints. Fulham had ten shots but one on target, while the Saints mustered only three, but had two goals ruled out for offside. There were plenty of promising signs for Scott Parker, who dialed into the match while having to self isolate. That was a sign of things to come for Fulham, as more of the squad tested positive.

Fulham haven’t had so much a problem with creating chances this season, and have managed to limit the damage inflicted against them, but you get the impression that if they are to escape relegation they need to sign a cutting-edge forward in the January transfer window. The circus montage of missed penalties epitomises Fulham’s bluntness when faced with an eight-yard wide goal, but it’s also the poor decision making contributing to the lack of goals at Fulham.

Now with two games in hand, Fulham should fancy their chances of dragging themselves out of the relegation zone. Brighton are looking increasingly vulnerable as time goes on, and Fulham are looking a lot better than West Brom and Sheffield United at this precise moment, even with serial relegation escapee Sam Allardyce at the Baggies. Scott Parker will be eager to take three points at his former club on Wednesday.

Hojbjerg was on the end of a heavy tackle that saw Brentford’s Joshua Da Silva sent off in the EFL Cup. The Dane is expected to have fully recovered by Wednesday night however. Giovani Lo Celso is recovering from a muscle injury and will be unavailable for the foreseeable future.

Ben Davies suffered a slight knock against Marine, but the Welshman is unlikely to be in the lineup ahead of Sergio Reguilon.

Subject to any further coronavirus testing, Fulham seem to have a full squad available for Wednesday. However, Scott Parker was clear in that his preparation efforts were put under jeopardy due to the scheduling change.

The lack of adequate match preparation due to COVID will mean that Fulham’s chances are slim, especially with Spurs’ confidence on the rise.