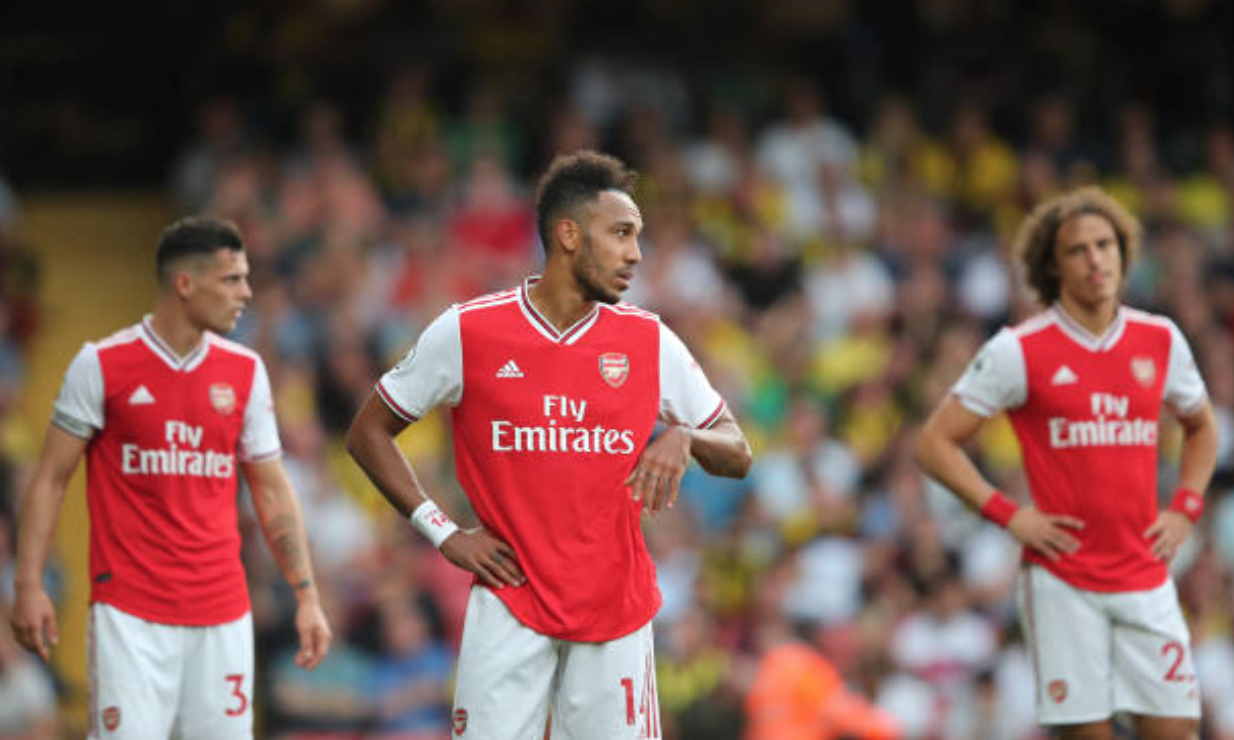 Arsenal capitulated to a pathetic draw against bottom of the table Watford as Quique Sanchez Flores grabbed a point on his return to the manager hot seat at Vicarage Road.

Flores welcomed back Capoue, Holebas and Deulofeu as he reshaped the starting eleven into a 4-2-3-1 whilst Unai Emery combatted the loss of Lacazette by playing a diamond midfield with Mesut Ozil at the top behind Aubameyang and Pepe.

Arsenal started off the better side and went ahead after 21 minutes after Watford failed to play to the whistle after a perceived foul, allowing Saed Kolasinac to stride forward and play inside to Aubameyang; the Arsenal forward’s first touch was sublime, cushioning the ball and letting it pop up a touch, allowing him to swivel and fire past Ben Foster. Ten minutes later Arsenal found themselves in an even more comfortable position as a fine team passing move – the longest this season to lead to a goal – saw Ozil slide Maitland Niles in who squared to allow Aubameyang to tap in a second.

From a position of comfort Arsenal inexplicably lost any control of the game. The second half was one-way traffic and once a Sokratis error allowed Deulofeu to set up Tom Cleverley in the 53rd minute, Watford looked the likelier winners. Any semblance of Arsenal control was lost once Ceballos and Guendouzi were subbed off around the hour mark (Ceballos born in the notoriously chilly Seville was subbed off because of the heat according to Emery).

Watford, driven on by a frenzied home crowd and a sparkling Deulofeu piled forward with wave after wave of attack and were rewarded with nine minutes to go when David Luiz again proved there’s not a rash lunge he doesn’t like the look of and brought down Roberto Pereyra. Pereyra took the spot-kick himself to send Leno the wrong way and slot home.

There was still time for Deulofeu and Doucoure to spurn chances to win the match as Arsenal clung on. Watford will feel encouraged by the performance but remain winless before a trip to Manchester City next week. Arsenal travel to Frankfurt in the Europa League during the week and if they show similar heart and organisation to Sunday the road to a second final in a row will be a very long one.

Last years Golden Boot winner had started this season in superb form scoring winners against Newcastle and Burnley, an equaliser in the North London Derby against Tottenham and a brace to put his side two up against Watford. He also set up the consolation at Anfield. In short, Arsenal look even more reliant on the Gabon international for goals and with Lacazette injured and Pepe nowhere near finding his feet yet, Aubameyang looks to be Arsenal’s only hope.

Despite winning the Golden Boot last season, question marks remained over the opposition and importance of some of his goals but with all five goals this season being worth points to Arsenal that accusation may be starting to be unfair especially with contributions in both top-six clashes too. What isn’t in doubt is his ability to demolish the lower lights in the league and a second consecutive Golden Boot could easily be on the cards.

What is Arsenal’s midfield for?

Even the best television shows have people in them that leave you wondering do we need them? Would Friends miss Joey? Would Only Fools and Horses miss Cassandra? Is there anyone apart from Tom Hardy’s Alfie Solomans that you’d watch in Peaky Blinders?

Arsenal’s midfield has become like that. Ostensibly Guendouzi, Xhaka and Torreira are defensive players there to allow the rest of the team to play. However, Xhaka seems to have regressed to a bigger liability than he ever was despite a promising improvement last season. Torreira appears to be so embarrassed to have even been compared to Kante that he is now presumably performing so poorly for so long to highlight Kante’s ability. Guendouzi is of a higher level but that may be damning him with feint praise.

There is also a fine line between being a midfield talisman and being a larger than life buffoon and Guendouzi is treading it. After an all action display and fine assist in the North London Derby, the young Frenchman clearly has huge potential. However, on Sunday he strayed into Xhaka territory with a scattergun approach, getting involved in a brawl and mocking the Watford fans with hand gestures of the score. Always a good idea when your side is on the brink of bottling it.

Would Arsenal’s forwards know if the midfield had disappeared? Arsenal’s goals were both assisted by full-backs on Sunday. Would Arsenal’s defence and keeper be any less protected if Arsenal’s midfield three was removed? Unlikely.

Deulofeu has had an inconsistent start to the season, in line with his inconsistent career. On Sunday though he was at his effervescent best, his running and dribbling had Maitland Niles on toast and his quick thinking created Cleverley’s goal that kick started the comeback.

Stationed wide left, Deulofeu should be a constant threat in this team and it is to be hoped Flores can bring the best out of him and as happened last spring, not let Deeney pick the team for him asking for Andre Gray to play instead of him. Deulofeu must contribute more goals though – seven of his ten league goals last season were against relegated sides – if he does he could fulfill the potential that saw him briefly shine at Barcelona.

New manager for Watford – so what?

In an era of increasingly short attention spans and foreign owners will we see a situation where midtable nothingness is eliminated by a play-off system for the top 8 or 10 in the league? How long can a league sustain a clearly defined top six and a bottom 14? Especially if the elite keep threatening a European Super League.

In the meantime, Gracia seems to have lost his job purely because the players were bored of his message in finishing midtable. Flores will probably manage 34 matches this season to get 40 points and lose his job in the summer. Will anyone notice the difference?

Arsenal have now conceded the most shots of any side in Europe’s top five leagues.

Arsenal have been outshot in 4/5 matches this season (Newcastle, Burnley, Liverpool and Watford)

Arsenal have made the most errors leading to goals in the Premier League since Emery joined.

Arsenal have conceded 14 more shots after 5 games than Derby did when they were relegated with a record low points total.

Only Burnley have conceded more away from home than Arsenal since Emery joined.

Worrying times for the Gunners.

Arsenal travel to Frankfurt on Thursday before entertaining Aston Villa at the Emirates whilst Watford travel to the Etihad in what could be a difficult fixture following the Champions 3-2 loss at the hands of Norwich.