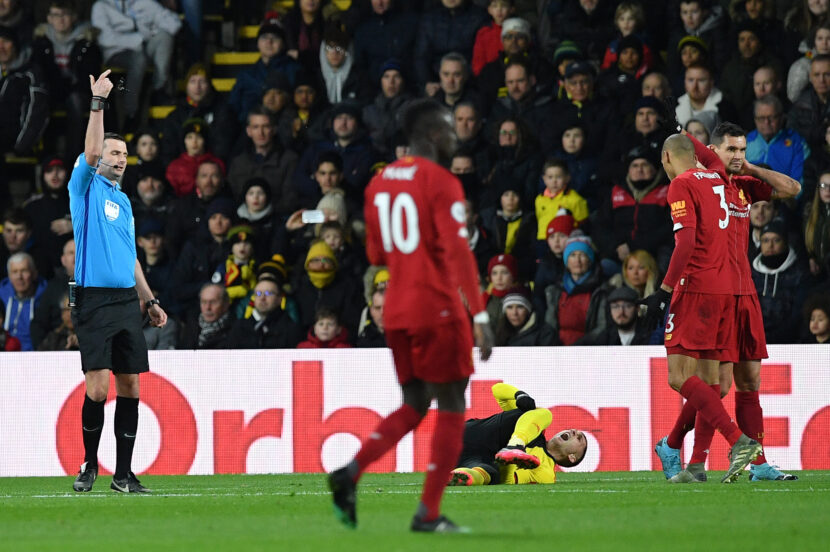 As the clock approaches minute 37 at Vicarage Road, disaster strikes. Watford’s nifty Spanish winger Gerard Deulofeu was being a thorn in the side of Liverpool’s unsinkable defence, finding ways to manoeuvre inside and produced the home team’s first chance of the game before tangling with the massive frame of Virgil van Dijk; rupturing his ACL by planting his foot into the ground in the process.

Jump forward to full time and a vicious and calculated one-two-three combo by Ismaïla Sarr and Troy Deeney made up for the loss of their main creative outlet which sunk the unsinkables. Liverpool had ventured into the Hornets nest and had been stung and Watford had just been brought back from the brink with a defibrillator-esque victory.

Vicarage Road was bouncing. Harry the Hornet was probably going ballistic and shushing the travelling fans. Watford were floating on cloud nine like Elton John floating above his piano, reinvigorated by the real possibility of the greatest of great escapes. Then they played mid-table Crystal Palace and Abedi Pele’s son sent them crashing back down to earth.

The Hertfordshire outfit were producing the stuff of dreams against Liverpool without their Spanish talisman, but can the Hornets really survive without him?

The jury is still out on that one. What we can all agree on, however, is that the former Barcelona man has been by far Watford’s most prolific creator; sitting atop the club’s seasonal standings with the most assists (five), most successful dribbles per game (2.6), most shots per game (2.3) and most chance-creating passes per game (1.6), as per WhoScored.

Couple that with his four goals to boot and Nigel Pearson has a huge void to fill on the left-wing of his defensively-anchored 4-2-3-1. Whilst Ignacio Pussetto and Danny Welbeck could be makeshift replacements (albeit ones that have fallen short of expectations so far) to replicate the essential pace and deep-roaming nature of Deulofeu, Pearson’s downfall is that he inevitably finds a way to smuggle Roberto Pereyra into the starting line-up like a packet of M&Ms into a cinema.

Where the Argentine falls short is the fact he needs the system to be centralised around him, but Watford have more dangerous attacking players, such as Sarr, to cater for to get the best results. Pearson’s side play fast counter-attacking football and Pereyra doesn’t have the speed to keep up with it, making him invisible for large portions of the game as he nonchalantly patrols the left flank.

Before Deulofeu’s injury, the Spaniard and Sarr were positioned deep up the pitch to put stern pressure on the defensive backline; with Sarr astonishingly far forward due to his incredible athleticism and frightening acceleration which allows him to glide through gaps in the opposition defence. This spreads the defensive line thin as the fullbacks have to watch for bursting runs, creating those exploitable gaps.

The introduction of Pereyra thwarts this as his slow-moving style allows defenders to migrate over to Sarr, as the real attacking threat, and smother him. Crystal Palace did this effectively and essentially nullified Watford’s entire attack, with Deeney getting no supply from the drowning Senegalese winger.

This tactical predictability could be detrimental for Watford’s relegation scramble, especially as they still are yet to play fellow drop-zone scrappers West Ham and Norwich. Arguably, Pearson’s best solution is the implementation of Ignacio Pussetto into the starting line-up to give a re-injection of pace into the left side. Whilst only featuring six times off the bench for the Hornets since signing from Udinese in January, the 24-year-old has shown fleeting glimpses of promise with his dribbling ability and agility – something he showed as a regular game-changing substitute in Serie A.

The Argentine is the closest replica to Gerard Deulofeu that Nigel Pearson has at his disposal and just having this pacey presence on the opposite flank frees up space for Ismaïla Sarr to start using his usual magic and obliterate defensive holes with his large touches and rapid feet.

After being lifted from the bottomless pit by a rescue campaign led by Nigel Pearson and a miracle victory over the ‘Champions of the World’, primarily conducted by a Senegalese maestro; Watford are once again clutching at the cliff-edge after being brought back to reality by Crystal Palace. With nine games to go and the Hornets avoiding the dreaded red zone by a mere goal, they can’t risk allowing Gerard Deulofeu’s injury to expose a massive exploitable weakness in their fast-paced turnover philosophy.

To reference the great Sir Alex Ferguson, Vicarage Road is entering ‘squeaky bum time’. If only there wasn’t a shortage of toilet paper at the minute…