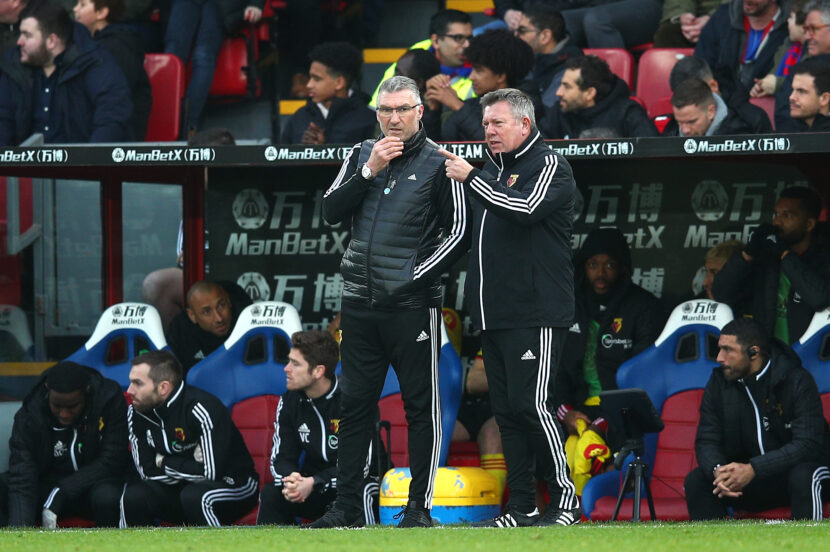 Watford will look to return to the sensational form that saw them beat champions-elect Liverpool this weekend as they host third-placed Leicester City, who seem to have found their feet again after a 4-0 thumping of Aston Villa. The game provides a reunion for current Hornets manager, and former Leicester boss, Nigel Pearson.

When Nigel Pearson, having only recently been sacked by Belgian second division side OH Leuven, was appointed Watford manager in December, his relegation survival miracle with Leicester City only a few years earlier must have been the critical element that the club’s hierarchy picked him for. Now dubbed (somewhat unoriginally) as ‘the great escape’, Leicester achieved a never-before-seen feat of late survival in the 2014-2015 season.

Having amassed only 19 points, winning only four games, and sitting in last for the majority of the season prior to April, Leicester then won seven out their final nine games, doubling their points tally, and finishing 14th. To give a comparison on how great a feat this was, Norwich, who are all but guaranteed to be relegated, have 21 points right now and with over three games more to play than that Leicester City side did. It was on this miracle that granted Pearson a return to the Premier League.

Fortunately for him, Watford aren’t in anywhere near as dire straits as the Foxes were, although things were beginning to look shaky. Right from the off, the Hornets seemed to look transformed. An impressive performance against Liverpool led into a win against Manchester United – and then a run of three wins and a draw which instantly boosted their survival hopes. While the performances have slipped somewhat, we only need to look as far back as two weeks ago, when they handed Liverpool their first Premier League loss of the season, to see that they have what it takes to keep themselves in the Premier League.

Currently sitting outside of the drop zone in 17th, although only by virtue of their goal difference, the Hornets are still in need of wins and points to see them safely to the 2020/21 season. With home games growing short and the attendance of fans under threat by coronavirus, a win here against Leicester may just be crucial to their survival hopes.

Foxes back on track

Leicester have endured something of a rough patch recently, compared with their fantastic form earlier on in the season, in which they won only one of the seven games played and bombed out of the League Cup semi-final to semi-local rivals Aston Villa. But they completed a revengeful win on Monday, bouncing back to their best as they ran rampant against a Villa team playing their first game since they lost the League cup final to Manchester City.

While their slump can be attributed to a whole host of factors such as fatigue, lack of rhythm, and loss of crucial players to injury, all these seemed to be wiped away as a fantastic Leicester display included the much-needed returns of Wilfrid Ndidi and the league’s top goalscorer, Jamie Vardy. By the end of the game, their football was back to its fast and fluid best, and their final goal was a reminder of just how quickly and easily they can cut through sides.

Leicester have made third place theirs this season and, while a Champions League place looks likely, work is still needed to secure it. The Foxes have set themselves up nicely for the run-in with their previous win and with a near-fully fit squad, but maintaining that form will be crucial if they want to play in Europe next year. Another game against another team flirting with relegation should make continuing their winning run easy enough – but the Foxes need to be wary and focused or they may find themselves slipping again.

Rodgers’ changes last game saw both Ben Chilwell (injury) and Ayoze Perez, regulars for the East Midlands side this season, dropped in favour of James Justin and Marc Albrighton who both contributed great performances. Dennis Praet continues to keep Leicester’s record signing, Youri Tielemans, out of the side with his hard work in the midfield, but a quiet performance from James Maddison alongside picking up a knock may seem him dropped in favour of the Belgian this weekend. Rodgers is now making his players fight for their place in the team – and it looks to be working.

Besides the long term injuries to Gerard Deulofeu and Daryl Janmaat, Watford are not expected to have any other doubts or concerns for Saturday’s game.

Ben Chilwell is a minor doubt for Leicester but could return to the squad in time whilst Daniel Amartey continues out with a long term issue. Ricardo Pereria has picked up a season-ending injury whilst James Maddison is also a doubt for the trip to Watford.

Leicester will be on top, but that doesn’t mean they won’t be able to keep Watford away from goal with the threat of Ismaila Sarr. A goal each in the first half, with the Foxes scoring first, but a fine second-half display from Rodgers’ side will see them tighten their grip on Champions League football.