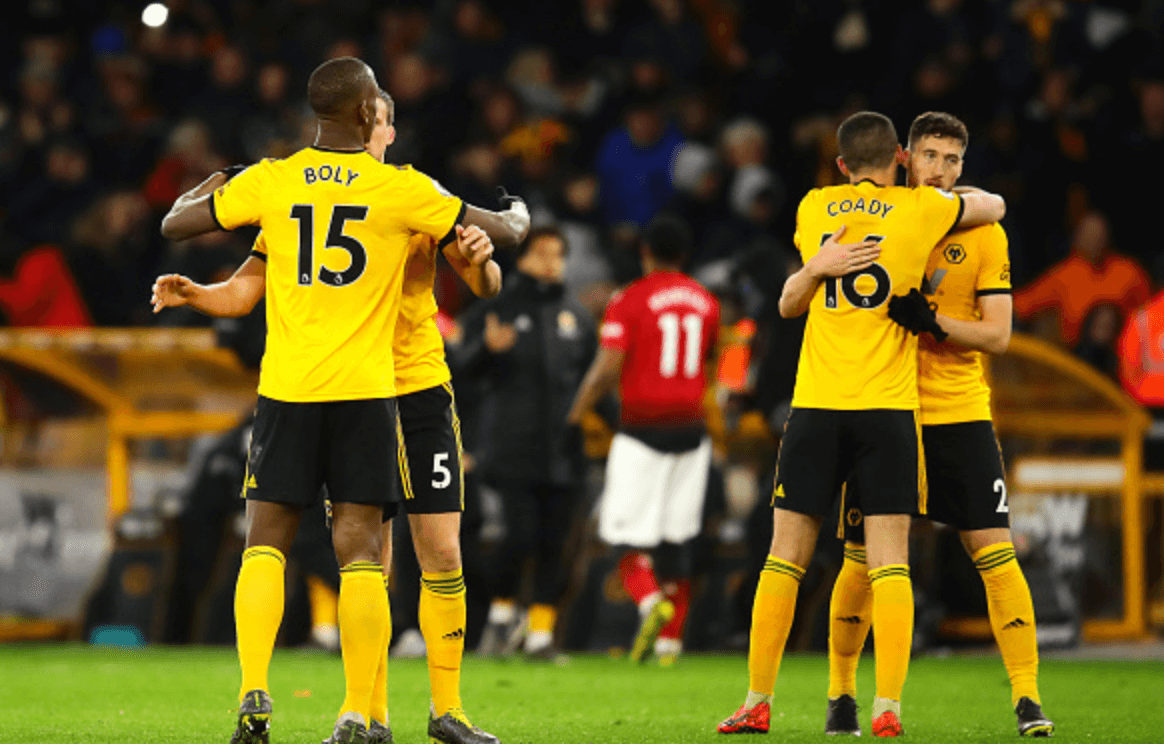 Manchester United’s hopes for a top-four finish were shattered on Tuesday as Wolves came from behind to beat them 2-1.

Molineux provided the setting for a fascinating encounter between two sides who still had lots to play for at this late stage of the season. Wolves were looking to bounce back after a disappointing defeat to Burnley and stay in the race for the Europa League while United were looking to keep the pressure on the top four after a string of disappointing performances against Arsenal and Watford.

United almost had the dream start when Diogo Dalot’s cross in the 5th minute was met by Lukaku but Rui Patricio was more than a match for the Belgian’s header and kept the scores level.

Scott McTominay opened the scoring for United with his first professional goal in the 13th minute when he collected a pass from Fred on the edge of the 18-yard box before hammering the ball past Patricio with a beautifully placed strike.

United took control of the game and should have doubled their lead in the 17th minute when Jesse Lingard found himself in acres of space in Wolves’ six yard box but the Englishman was unable to get enough purchase on the subsequent header.

United were left to rue their squandered chances in the 25th minute when Wolves equalized. A mistake from Fred resulted in Raúl Jiménez finding Diogo Jota with a clinical through ball who slotted past David De Gea to send Molineux into raptures.

Wolves dominated the rest of the first half with quick, clinical passing and some relentless pressing when out of possession as both sides went into the break on level terms.

United had a greater share of the possession in the opening stages of the second half and kept the Wolves back four busy. Patricio produced an outstanding save in the 55th minute when he denied a point-blank header from McTominay.

Disaster struck for United when they were reduced to ten men in the 57th minute after Ashley Young picked up his second yellow card in five minutes for a reckless lunge on Jota. Young can have no arguments about his dismissal but will be disappointed with himself after his needless red card left his side with it all to do for the remaining 30 minutes.

Wolves were far from impressive after the sending off but sealed the victory in the 77th minute after a sublime cross from João Moutinho caused chaos the United six-yard box before Chris Smalling turned the ball into his own net.

Wolves were worthy winners in the end but Solskjaer will be furious that some of his players went missing again in such a big match. Tonight’s result is a disappointing conclusion to United’s top four aspirations after such a brilliant rally in recent months.

Is Ole’s Honeymoon Over?

If it is, it is not so much dramatic end but an inevitable plateauing of performance and fitness levels after a whirlwind start to his tenure. The team has looked physically spent since that heroic performance in Paris almost a month ago and this exhaustion has been reflected in some poor performances against Watford and again tonight.

To be fair to United, they have been in throes of an injury crisis with up to ten first-team players missing recent fixtures due to injury. This has pushed the remaining squad to their brink at this late stage of the season.

Things do not look to be getting better anytime soon as Solskjaer will now have to contend with suspensions for Shaw and Young after tonight and a less-than-enviable Champion’s League test against Barcelona just over the horizon.

Paul Pogba has been doing his best impression of his performances under Jose Mourinho these last two Premier League fixtures. It appears that Zinedine Zidane’s very public courting of the midfielder has gone to Pogba’s head as he was anonymous for United tonight.

The Frenchman was easily dispossessed and looked to be treading water for much of the game as he sauntered about the pitch aimlessly. After performances like these, United may look to cash in on their prodigal son this summer and reinvest in players who are interested in playing for the badge.

Fred: The Good, the Bad and the Ugly

United’s €50m signing from Shakhtar Donetsk has had a patchy first season in Manchester to say the least. The Brazilian has looked bereft of confidence for much of the season and has left many United fans scratching their head as to what role he plays in the side. Many had hoped he turned a corner after his much-lauded performance against PSG but the Brazilian’s problems were on display once again tonight.

Fred look composed and confident in the opening stages of the match as he recycled possession with ease. However, this was all undone in the 25th minute when a horrendous mistake led to Wolves equalizing. From then on, the midfielder’s confidence was rocked and he looked like a liability before being hauled off for Phil Jones in the 65th minute after Young’s sending off.

Watching Fred can be an extremely frustrating experience, there is clearly a neat, energetic and mobile midfielder whose strengths would benefit his more creative teammates. However, he is often caught ball-watching, shows little positional instinct and is prone to errors which often destroy his confidence. Perhaps Solskjaer’s more personable style of management will help foster a trust and confidence in Fred before he is written off as another expensive flop.

Jota was a live wire for Wolves all evening and, at just 22, is shaping up to be a future star of the Premier League. The Portuguese attacker scored his seventh goal of the season and his pace, creativity and vision caused United untold problems all night especially as Wolves looked to take United on the counterattack.

A very impressive performance from a very promising player.

Wolves have had a phenomenal season since winning promotion from the Championship last year. Players like Ruben Neves, Moutinho, Raúl Jiménez, Matt Doherty and Conor Coady have been immense all season and have made Wolves one of the most exciting teams to win promotion to the Premier League in years.

Much praise must be given to manager Nuno Espírito Santo who should be in with a shout for manager of the season. When things click for them, Wolves are a technically adept, clinical side who thrive on the counterattack. Their talent is evidenced by impressive results against the top six which saw them takes points from the likes of Manchester City, Arsenal, Chelsea and United.

Performances against sides in the bottom half have been less impressive but if Santo is able to instil the same level of focus his side have against the bigger teams, Wolves should be regular contenders for the European spots in the years to come.