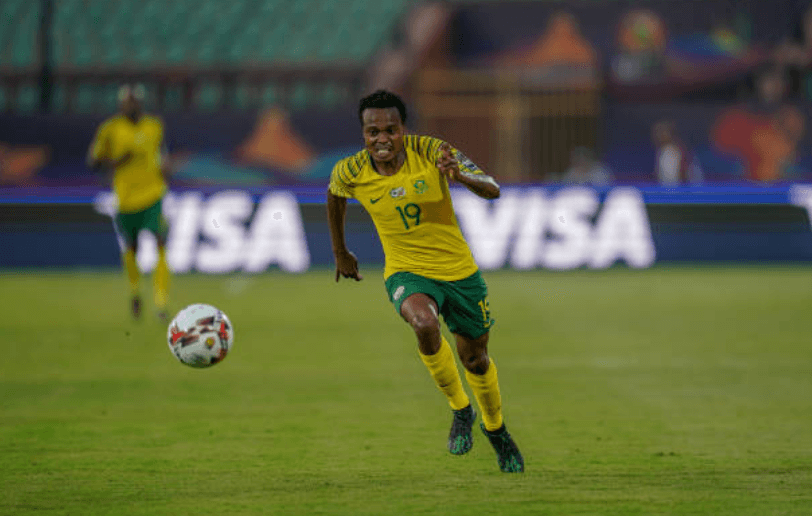 Could Percy Tau’s impressive AFCON form take him all the way to the Premier League this summer?

Premier League and European teams will be on high alert this summer after another impressive performance from Percy Tau in the Africa Cup of Nations.

Despite being on the losing side for South Africa (Bafana Bafana) in the opening game against Ivory Coast, he stood out as Bafana Bafana’s best player. Impressively, he won the man of the match award against Namibia in the following game assisting the only goal of the game to keep their AFCON dreams alive.

The third and final game saw Tau and his team narrowly lose to Morocco and despite this loss, they miraculously made it through to the knockouts by the skin of their teeth, otherwise known as the best third-place loser.

As a result, they picked up a place in the last 16 against the tournement hosts Egypt. Understandably, Mo Salah and his Egyptian’s were the favourites against Percy Tau’s South Africa yet against all odds, Bafana Bafana picked up the victory courtesy of Lorch’s 85 minute strike.

Their victory sets up another 90 minutes with the Nigeria in another match where Percy Tau could be so important to their progression. But what is it about Tau which is so impressive?

Tau is an aggressive winger using his electric pace to beat defenders rather than using too much skill. As he is more of an Mbappé than a Neymar, he is at the mercy of the service provided by his South African teammates. Without the creativity he is starved of opportunities, which has often plagued the Bafana Bafana so far this tournament. The Proximus (Belgian’s second tier) player of the season needs to be fed if they are to have any chance of progressing against Nigeria.

Percy Tau currently plies his trade in the Belgian second tier on loan from Brighton and Hove Albion due to visa restrictions. Having been originally signed by Brighton last summer fans were eager to see him on the South Coast yet the FA’s strict visa regulations, whereby a player has to be playing in a FIFA ranked top 50 nation for at least two years, has prohibited his Premier League dream.

There are ways to overcome this, which usually consists of paying a large transfer fee or paying above-average wages. These both usually have to be within the top 50th percentile of all transfer or wages of the Premier League. However, additional factors can come into play, including exceptional progression in regional knockout tournaments. For example, if the Bafana Bafana progress as far as the semi-final, this adds up in Tau’s favour. In fact, it will assign one point to his case with a total of five points needed to successfully apply for his visa.

Many stars need to align for his transfer to materialise to the Premier League and this is one of many transfer predicaments that showcases the FA’s incredibly restricting transfer regulations.

Under the current circumstances, it has only been French teams who have been linked with the South African winger as teammates Bongani Zungu and Lebo Mothiba play for Amiens SC and RC Strasbourg respectively. However, if a visa becomes available due to the aforementioned factors then Brighton may have a few options to choose from.

In light of this, Brighton can either cash in on this investment or look to the long-term future of South Africa’s most exciting talent. Cashing in now to a French team could consider costly if he was to emerge as one of Europe’s hottest prospects a few years down the line.

From a marketing perspective, Tau could prove to be of paramount importance in globalising the Brighton brand and increasing fan support from South Africa to those following Tau in his journey from the Mamelodi Sundowns in Cape Town to Brighton via Belgium. It is a journey with a compelling story, all for the hope of playing in the Premier League one day.