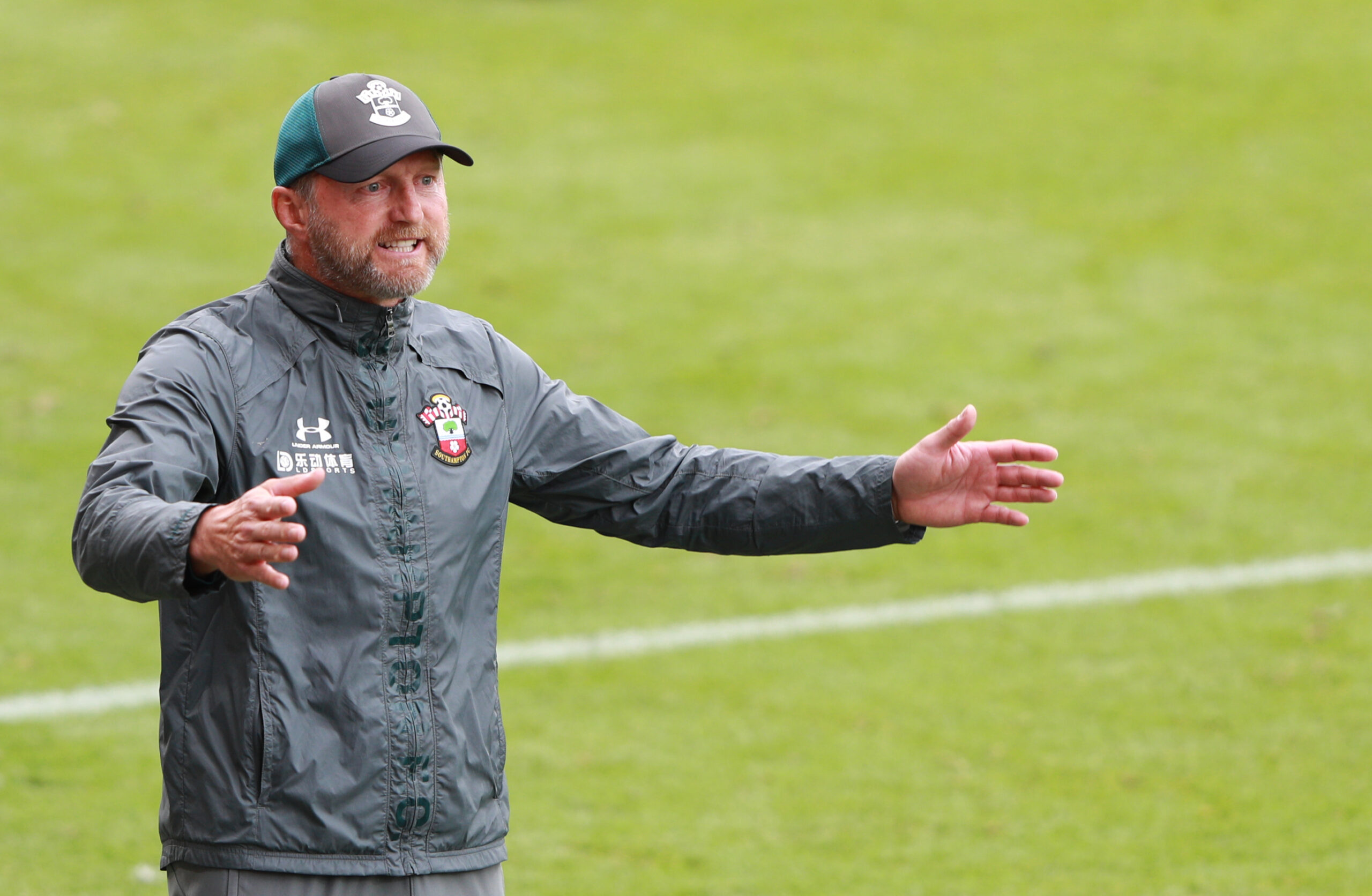 Pandemic, COVID-19, lockdown and all that… Who cares? Football’s back. Let’s get stuck in.

Both teams have emerged relatively unscathed from undefeated preseasons. Albeit, Southampton only had one match compared to Palace’s four where Championship team Millwall were their most advanced opponent. Southampton also managed to score seven goals – as many as Palace managed in all four of their fixtures combined. However, whichever way you spin it, both managers are happy.

Both clubs enter this brand new season with lofty ambitions: a top 10 finish (and even further for the more optimistic fans). When you consider the personnel both organisations possess – on and off the pitch – they seem to have a lot of the aspects covered by reliable employees.

Ralph Hasenhüttl has seen some deadwood depart Staplewood with few reinforcements. Mohammed Salisu (£10.9m) and Kyle Walker-Peters (£12m) have been the only potential line-up-altering arrivals. The club saw it more important to shore up a defence which conceded the fifth-most goals (60) in the Premier League last season. However, this can be misleading statistic, especially considering the Saints’ vast upturn in form following the Premier League restart.

Southampton were third on the post-restart ladder, becoming only 1 of 5 teams to concede less than 10 goals in that period. This was achieved while still scoring 16 goals – equal-fifth in the league. It also saw the emergence of Che Adams as a Premier League player, who scored all four of his season’s goals in this period.

This is besides the talent that their coach, Hasenhüttl, clearly exhibits. And when you consider all this, it’s no secret as to why the optimism has reached boiling point within the walls of St Mary’s Stadium. This is a side that was resurrected post-lockdown into a high-pressing, long-ball, direct-football beast.

Southampton set up in a 4-2-2-2 formation on the pitch with two players ‘behind’ the striker – naturally, Nathan Redmond and Stuart Armstrong last season – who are given the freedom to roam between the wings and the centre of the pitch.

This meant they could overload teams through the central column of the field, forcing turnovers and producing a plethora of opportunities from these sorts of situations.

This also means the width has to be provided by their fullbacks – presumably Ryan Bertrand from the left and Walker-Peters from the right this season. It’s a system that seems to work so well assuming that their two holding midfielders, James Ward-Prowse and the now-Tottenham-contracted Pierre-Emile Højbjerg last season, could hold their ground. And this they did.

Former Barcelona and Chelsea midfielder Oriol Romeu, looks set to reprise his holding midfield role this season, which will again allow Ward-Prowse to be the more adventurous of the two 6’s.

These two quickly become the most important players of the system. Not technically the best or the proficient in front of goal but the most vital. They allow the team to push forward with the ability to thwart an opposition counter-attack, while still providing creativity and threat from the middle-third.

On paper, it is a system that seems to be well opposed by Palace. Redmond and Armstrong’s tendency to come more central combined with Bertrand and Walker-Peter’s forays forward mean their flanks become incredibly exposed against a side who base their play-style on their wingers. It means that the not-so-fast Ward-Prowse and Romeu are left to deal with the counterattacks and it has caused problems in the past.

Their only loss post-restart was against Mikel Arteta’s similarly reinvigorated Arsenal and, although their two goals came as a result of defensive errors, the Gunners had three clear one-on-ones throughout the match after Arsenal forwards released from wide areas.

Manchester United’s second in July’s 2-2 draw and Everton’s equaliser in their July tie are similar examples. While Sheffield United and Watford both benefited from overloading the full-back areas, leading to their goals.

A quick look at his goal and assist tallies would be quite disparaging but Palace fans will always reference the final-day five-goal display against Bournemouth to end the 2018/19 season where Zaha played a crucial role in all five goals yet only registered two direct assists. This is his impact.

Interestingly, he has registered three goals and two assists in Palace’s four pre-season games – relishing a new, freer role in which he can roam between a typical striker position and that of a winger.

Jordan Ayew is now also noted as a distinct goal threat and a pest to deal with. Ayew (2.8 times per game) and Zaha (3.2) were in the top four most fouled players last season in the Premier League. In addition to this, they have now added QPR’s highly rated 22-year old, Eberchi Eze, the fifth-most fouled player in the Championship – three times per game. Eze’s record in the Championship last season was significant.

Eze was in the top 20 for shots per game (2.2), assists (8) and key passes per game (1.8). With a higher class of finishers and movement around him, these numbers can only increase.

The Nigerian-born midfielder had the third-highest WhoScored rating (7.36), was also in the top five players for dribbles per game (4.8) and successful dribbles per game (3). While these statistics, when isolated, are not significant, it is their relevance to Palace which should get fans excited.

The general consensus for Palace’s opposition last season was to send multiple players to guard the one Zaha, block Ayew and that was that. Now with Eze as another creator and dribbler, teams will have to divert their attention to multiple players.

This is especially relevant now with the addition of Michy Batshuayi on loan (with an option to buy) – a player who scored five goals in nine starts in a previous half-season stint at the club late in the 2018/19 season.

Palace are now more unpredictable than ever and boast an attacking list to challenge the best of the rest.

Their reluctance to play out from their back will also frustrate Southampton who love to press a possession-based team. Seemingly, these two teams are polar opposites.

One is direct with a centrally-focussed attack revolving around high octane pressing. While the other is a counterattacking, wing-based side who can frustrate any team with their low defensive block.

With this in mind, it is a game that will require great tactical planning from both coaching teams

It wouldn’t be Palace without a distinct list of injuries to go with the optimism.

Firstly, Batshuayi – having just returned from a successful international tour with Belgium where he scored two goals against Iceland – may not be fit enough to start for the weekend.

However, having registered as a Palace player before the midday Friday deadline, he can feature for the Eagles and this will most likely be from the bench.

Nathan Ferguson arrived to the club still rehabilitating a knee injury but he has gone from strength to strength at Coper’s Cope. Nonethteless, he is still a fair way off from debuting in the Premier League.

A hat-trick of thigh injuries to central defenders James Tomkins, Gary Cahill and Mamadou Sakho will see them watch the opening match from the stands. The hope is that Roy Hodgson provides an update on the trio during his pre-Southampton interview as Palace’s lips have been tightly sealed regarding their prognoses.

Patrick van Aanholt is back training (not fully) but will not feature at least for the first couple of games, meaning 20-year old Tyrick Mitchell will be allowed to reprise his role at left-back.

Christian Benteke is also unavailable, while Eberechi Eze returned to full training with the squad during the week and should be fit to start for this weekend’s game – should the manager choose to do so.

Note: Jeffrey Schlupp could start in place of Andros Townsend and switch flanks with Zaha. Hodgson seems unsettled on his front three for the moment, but Townsend does offer a greater degree of defensive assurance.

Winger Stuart Armstrong has come back from international duty with an injured quadricep, but his lay-off shouldn’t be extensive. Moussa Djenepo will most likely start in his absence.

Otherwise, the rest of Hasenhüttl’s players are fit and at his disposal.

Southampton will look to get on the front foot early and gain a stronghold on the game but this could play into the hands of Palace who offer pace and innovation on the counterattack. Both teams may be unsettled in defence – Palace due to injuries and Southampton with a newcomer in the centre of defence – and this could play into the eyes of the neutral fan as it may allow for an encompassing match.