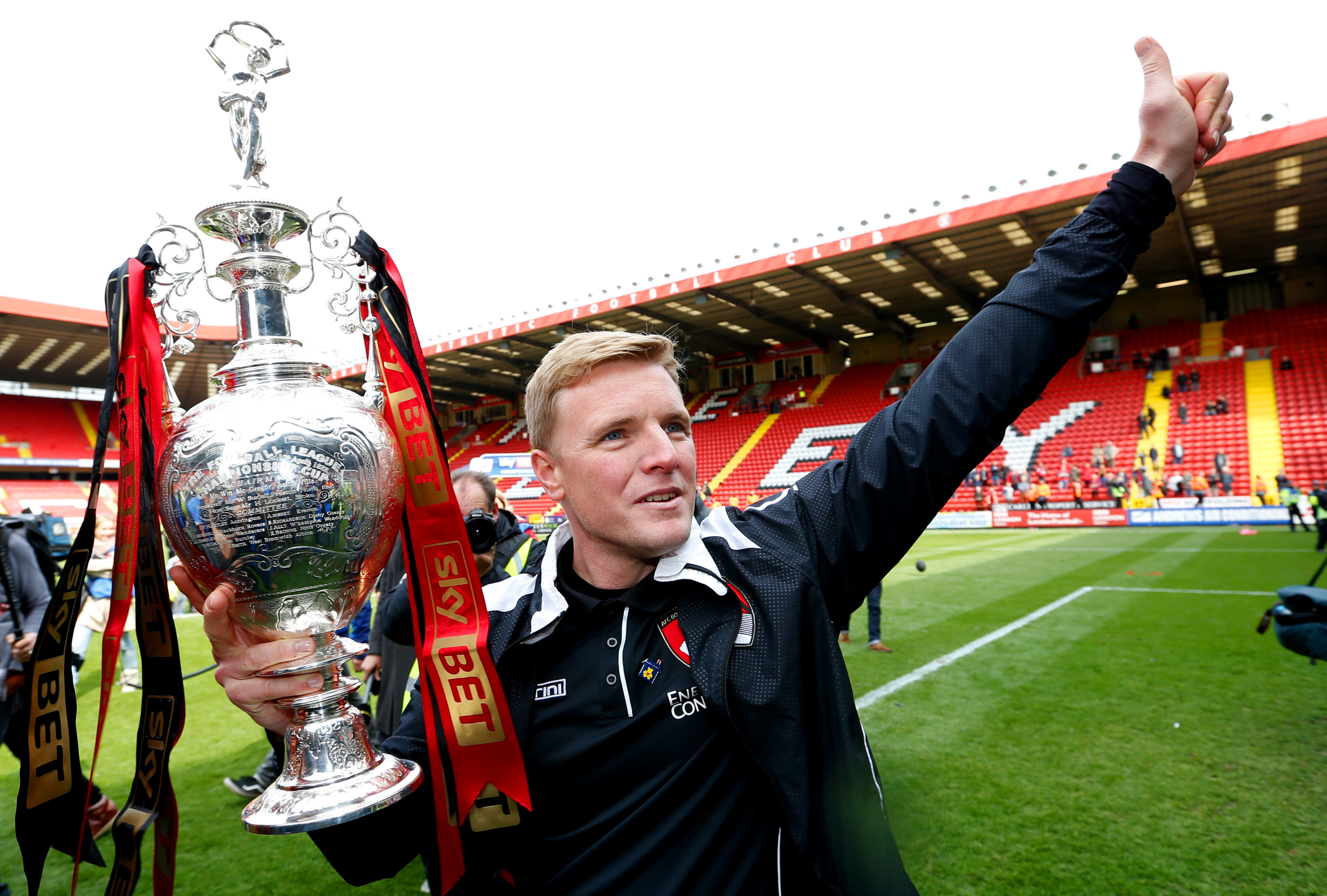 Welcome to Glory Days, a new 90MAAT feature series that looks at the greatest season in the history of each Premier League club.

The season we choose will usually be a campaign referred to by fans of the club as something akin to “glory days”, the times when it was great to be a fan of the club, when timeless memories were made.

AFC Bournemouth are undeniably in the midst of their glory days right now, currently enjoying their fifth consecutive season in the Premier League, in their first-ever spell in the top-flight.

Among the smallest clubs currently in the Premier League, the Cherries’ trophy cabinet boasts no major honours, though they have previously won the EFL Trophy, the second and third tiers and two minor cups that are no longer contested.

Their rise has been meteoric, Eddie Howe has guided the Cherries from relegation favourites in League Two in 2008/09 to the Premier League where they consistently survive, though Howe took a brief spell away from the club while they were in the third tier.

Including this season, Bournemouth have spent seven seasons in the top two tiers of English football – the last seven. Incredibly, their two seasons in the Championship are their only ever foray in the second tier.

Picking a period would be easy, but to single out one season is more difficult. While this is the top of Bournemouth’s wave, we’ve obviously chosen a recent season as the greatest in the club’s history.

For the sheer joy, uncharted territory and unexpected cup run that accompanied it, we believe that the greatest season in the history of the club is not one of their four in the Premier League, but 2014/15, the season in which they were promoted.

As always, feel free to disagree, but listen to our case below…

In their first-ever season in the Championship, Eddie Howe’s men finished a respectable 10th. In their second, despite having the smallest stadium in the league, they blew away the opposition to finish top of the pile.

Though a 4-0 win at Huddersfield had fans dreaming on the opening day of the season, the Cherries actually started slowly. They won only two more of their first 10 league games and languished in 15th, before storming up the table.

Bournemouth embarked on an improbable run from October to December, going 14 unbeaten with three draws. During this run, the Cherries memorably scored eight goals for the first and only time in their history in an 8-0 drubbing at Birmingham (they scored 10 in a game in 1939, but the season and result were wiped after the breakout of World War Two).

Goals became the Cherries specialty, offering up expansive football that saw them score five or more goals away from home on three different occasions. Much like the Bournemouth of today, their defence was often shaky, but the power in attack often saw them outscore their opponents.

By early November, Bournemouth sat top of the pile but traded positions with front runners that included Watford, Ipswich, Norwich and Middlesbrough over the course of the season.

A run of five games without a win in February threatened to derail the building hopes that the small South Coast club could reach the Premier League for the first time ever, but it was to prove just a blip as the Cherries would not lose again, sealing the title with a 3-0 win at Charlton.

The promotion race was not actually officially over until the final day, though it required a set of improbable set of scorelines and a 19-goal swing in favour of Middlesbrough.

The Cherries finished on 90 points, scoring a league-best 98 goals and conceding 45, bettered only by Middlesbrough. Their eight league losses were also a league-best and typifies the resilience Eddie Howe’s side had to show to grind out points from every game.

You can argue that achieving Premier League survival the following campaign was a bigger feat, and you may be right. But the joy of survival is dwarfed by that of promotion, especially to a division your club has never been in before.

Bournemouth’s success was built largely on a stable squad, made up mostly of players who had risen through the league system with the Cherries.

They began the season with Lee Camp as established first-choice goalkeeper, but it would be Artur Boruc who would play the most, the Polish stopper joining on loan from fellow South Coast side Southampton in September.

The Cherries had an incredibly settled defence, with Simon Francis, Steve Cook, captain Tommy Elphick and Charlie Daniels starting 175 out of a possible 184 games between them.

In midfield, Matt Ritchie would line up on the right, Marc Pugh on the left, with Harry Arter and summer signing Andrew Surman lining up in the middle.

Spearheading the 4-4-2 was another summer signing, Callum Wilson, who usually lined up with one of Yann Kermorgant or Brett Pitman. Between the three of them, they scored 48 league goals over the course of the season.

While their starting XI was pretty settled, there were fringe roles for some notable names, including Ryan Fraser, Dan Gosling, Adam Smith and Junior Stanislas, who have all since made a name for themselves at Dean Court in the Premier League.

Impressive knockout performances drew the attention of Premier League clubs even before Bournemouth became one of them, and 2014/15 saw the Cherries enjoy their best ever result in the League Cup.

They breezed past Exeter, Northampton and Cardiff to reach the fourth round for the first time in their history. Not content with breaking the club record already, a second-string Cherries XI beat West Brom 2-1 to reach the quarter-finals, where they’d meet Liverpool at Dean Court.

The two sides had met the season before in the FA Cup fourth round, where Liverpool ran out 2-0 winners and the Reds ran out winners once again, winning 3-1 with two goals from Raheem Sterling and one from Lazar Markovic, with Dan Gosling grabbing Bournemouth’s only effort.

In the FA Cup, another second-string XI dispatched fellow Championship side Rotherham 5-1, despite going a goal down early on. In the fourth round, Bournemouth travelled to Premier League Aston Villa, who ended their run with a 2-1 victory.

The quarter-final remains the furthest the Cherries have reached in the League Cup to date, though they matched that feat in 2018/19 as well. Perhaps surprisingly, the fifth round is the furthest they have ever gone in the FA Cup, doing so in 2015/16 and the memorable run of 1988/89.

In truth, there weren’t many at all and none of any real significance. There was no shame in exiting the Cups to higher league opposition and though games were drawn and lost in the league, there was no moment of any kind of crisis or embarrassment.

For that reason, the low point we’ve picked was the home draw against Sheffield Wednesday. The Cherries went into their 44th league game a point behind second placed Middlesbrough, who had already played and won that weekend. A Bournemouth win would put them two points and a significant goal difference clear, with two games to play.

A topsy-turvy encounter ensued, with Kieran Lee giving Wednesday the lead before Yann Kermorgant hit back in the second half. Simon Francis was sent off with 10 minutes to play after receiving his second yellow card, but Matt Ritchie put the Cherries ahead with five to play with a long range belter.

It was not to last though, and Wednesday striker Chris Maguire bagged a penalty at the death to temper Bournemouth’s promotion party. The Cherries moved back to second on goal difference, keeping the promotion race in their hands, but they’d have to play their penultimate game without stalwart Francis.

In the end, they made light work of their last two games, while Middlesbrough and Watford both dropped points to hand Bournemouth the title and promotion. When an academic 2-2 draw is the low point of your season, you’ve probably just enjoyed an exceptional campaign.

A game that every Cherries fan remembers vividly, their final home game of the season all but confirmed their promotion to the Premier League.

Rivals Middlesbrough went down 4-3 to Fulham on Saturday afternoon, handing the Cherries the chance to move three points and an improbable goal difference ahead with just one game to play.

Eddie Howe’s men seized their chance, dismantling their lowly opponents with first half goals from Marc Pugh and Matt Ritchie and a second-half effort from Callum Wilson after Bolton’s Dorian Dervite saw red.

The ecstatic Cherries fans invaded the pitch at full time, fully aware that they would be playing Premier League football for the first time in their history even though it was not mathematically confirmed yet.

Why this was the greatest season?

In truth, I could easily have picked the following season, which saw Bournemouth retain their Premier League status against the odds and included victories over Chelsea and Manchester United.

But all things considered, 2014/15 was a greater season on the whole. Reaching new territory in Cup competitions, a record 8-0 away league win and 26 league wins tell enough of a story.