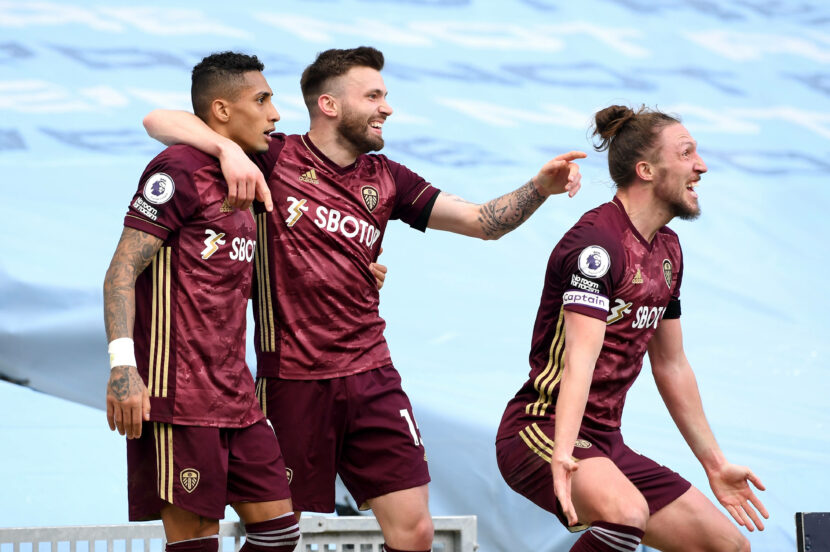 Marcelo Bielsa vs Jurgen Klopp, attack vs attack and three vital points on the line for Liverpool, who are in hot pursuit of Champions League football (or just a top-four space).

Against all the odds, Leeds United beat the champions-elect Manchester City with a last-minute goal last week. Stuart Dallas scored his second goal of the same in the 92nd minute, sealing a famous win for a 10-man Leeds United side. Guardiola’s side equalised in the 76th minute through Ferran Torres, but it wasn’t to be for Manchester City, who have failed to beat Bielsa’s side on both occasions this season.

Liverpool were also victorious last week. A last-minute goal from Trent Alexander-Arnold was enough for The Reds to get all three points, as they put an end to a six-game run with no wins at Anfield. Villa caused Liverpool plenty of problems scoring the first minutes before halftime. The Reds responded soon after the break, as Mo Salah scored his 19th goal of the season before Alexander-Arnold’s rocket from outside the box won the game in the 91st minute. The victory meant Klopp’s side moved up into 6th, as they continue their pursuit on the top four.

Monday’s fixture will be a highly anticipated clash between the two sides. When these sides last met it ended as a seven goals thriller, where Liverpool came out on top winning 4-3. This game promises to be another thriller; there could be plenty of goals and action at both ends is inevitable.

Bielsa’s side are loving their football at the moment. Now that Leeds are safe from relegation, they have nothing to lose and this often brings out the best in teams. Last week was an example of this, as they beat City at the Etihad, with only ten men for most of the game.

On the other hand, this could mean they are susceptible to having a lack of motivation. Liverpool are in desperate need of points at this stage of the season and will give their all on Monday night. Leeds have nothing to play for, so if Bielsa’s side doesn’t turn up, they could be swept away.

Another prospect that will get fans excited are the attacking talents on display. For Leeds, Raphinha and Bamford are the main threats. Bamford is on 14 goals this season and fourth in the race for the Golden Boot. Raphinha always dazzles his opponents when he is playing and has contributed six goals and seven assists this season.

For The Reds, Mo Salah has been their go-to man this season. Salah is chasing Kane in the Golden Boot race – Kane has 21 goals, Salah has 19. Elsewhere Jota, Firmino and Mane will supply additional threats on the wings, which could cause the Leeds defence a whole host of problems on Monday night.

Liam Cooper is suspended for Monday night’s game after receiving a red card against City last week. Raphinha was reported to have picked up a knock, but he is expected to be fit enough to face the champions. Rodrigo has a muscle injury that has seen him miss the last two games, so he is a doubt.

The Reds have no fresh injuries ahead of Monday night’s clash against Leeds. Jurgen Klopp was criticised when he played 4-3-3 against Madrid in the mid-week game and he could revert to an attacking 4-2-3-1, which would utilise all four attacking players.

In the midfield two, Fabinho and Thiago could partner each other, with Firmino playing in the central position. This would push Jota on as the striker, with Mane and Salah the wide players. This decision all depends on whether Klopp starts the out-of-form Mane or not.

I think Liverpool will win. After being knocked out of the Champions League, they must now win all their remaining games, if they are to have any chance of finishing in the top four. Leeds have been great recently, but I think The Reds could exploit their leaky defence, in what will surely be an end-to-end thriller of a game. Goals at both ends are imminent.