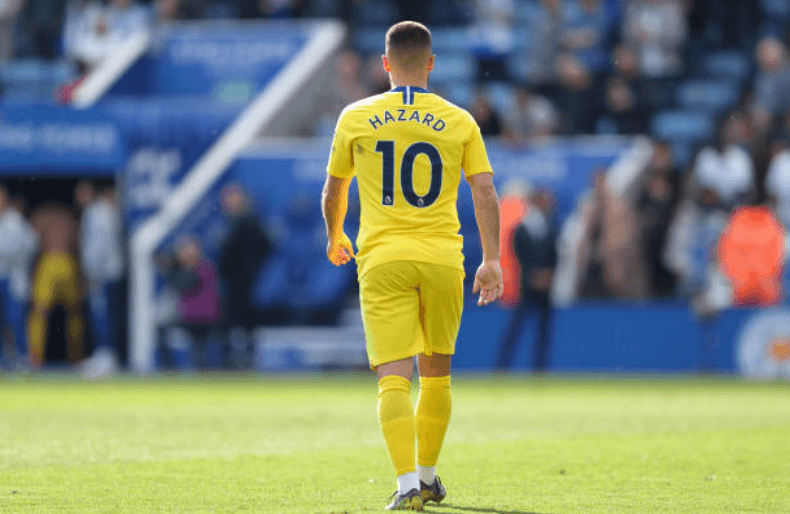 A 0-0 stalemate greeted both Leicester and Chelsea at the King Power Stadium in the 100th league meeting between the two sides in a fixture which confirmed Chelsea’s top-four position and Leicester’s top-half finish.

It was not a match without chances though and Chelsea should have broken the deadlock early on as Barkley latched onto a through ball from Jorginho which split the Leicester defence, only for the Englishman to be denied by a smart save from Kasper Schmeichel. It was Leicester’s turn to attack next though and the hosts had two decent chances. The first found Choudhury playing a whizzing ball across the field to Ben Chilwell, who after a one-two with Vardy, forced a save from Chelsea goalkeeper, Caballero, who replaced Kepa in the East Midlands.

ehe favour was returned from Chilwell next as he set up Vardy from a free-kick, however the strikers’ effort failed to really test the Chelsea goal as his header found the hands of Caballero. It was Vardy who really should have opened the scoring next though as he found himself two on one following David Luiz’ slip which left Leicester’s number nine sprinting towards the Chelsea goal.

Vardy unselfishly tried to play in Tielemens, yet the ball was forced well wide for the Belgian who was forced to shoot from a tight angle. The correct ball or shot would have certainly led to the first goal of the game and Vardy will be disappointed in himself that he didn’t do better.

It was Higuain who missed the best chance of the half though as some good work from Marcos Alonso left Higuain free from yards out only for the Argentine to fluff his effort wide of the post. In response to the strikers’ woeful miss, away supports began to sing the name of Tammy Abraham, who coincidently was in on the goals this weekend as he helped Aston Villa to a 2-1 lead in the first leg of their Championship play-off tie vs West Brom.

The second half flew by with minimal chances for either side with Tielemens having the best chances for the hosts yet he failed to find the target with his efforts. The final whistle was greeted well by both fans with Chelsea finishing in 3rd above their London rivals whilst Leicester secured a top-half finish.

Something to build upon

Looking back on the Foxes last three Premier League games, if they were to pick up a point it would have been classed as a good end to the season. Yet Rodgers’ men annihilated Arsenal whilst also going close at the Etihad against the Premier League Champions. They also held their own against Sarri’s Chelsea – whilst only conceding one goal in the three fixtures.

It has been a topsy-turvy season for the Foxes who experienced multiple highs and lows during the campaign. Claude Puel was given the boot back in February after a run of losses and was replaced by Brendan Rodgers, who has impressed early on in his spell at Leicester.

The Northern Irish man has had 10 games to make a mark on his new side and after a disappointing loss in his first game vs Watford, he has not looked back since and picked up five wins and two draws. Rodgers’ Leicester have been effective and next season is looking to be an exciting one for the East Midlands side.

Rodgers stated after the 90-minutes vs Chelsea – ‘I think the players have been developing and developing right the way through the season so far and like I said, in my period now with them there’s so much to be encouraged about’. Few have tipped the Foxes to challenge the top-six next season and after their third highest Premier League finish this season, they will be looking to build upon that and certainly challenge 7th place next year, which has eluded them over the last two campaigns.

All eyes on Baku

After seeing off Frankfurt on penalties during last week, Sarri will bring his Chelsea side to Baku at the end of the month to face their London rivals, Arsenal, in the Europa League final. It has been an odd first season for Sarri who has received vast criticism in his first campaign in the Premier League.

Having said this, the Italian has bought Chelsea to the Carabao Cup final whilst also finishing third in the league, adding the Europa League final to this and it has to be seen as a good season for the man in charge. Sarri claimed after the fixture against Leicester that ‘the season is good’ adding ‘we were in trouble two or three months ago but third place is a very good result. Now we have to go to Baku for the Europa League final and we have the chance for our season to be wonderful’.

End of an era

The fixture between Leicester and Chelsea marked the end of the road for a number of players. Danny Simpson and Shinji Okazaki marked the end of their Leicester careers and were both given their last appearances vs the Blues. The English right-back and the Japanese striker were given huge receptions and took their place in the clubs history books as they were both crucial in their sides Premier League success back in 2015/16.

Chelsea also said goodbye to Gary Cahill, who did not feature in the East Midlands. The defender said his goodbyes to the Chelsea faithful in their 3-0 win vs Watford last weekend. The 33-year-old joined Chelsea from Bolton in January 2012 and has gone on to make almost 200 appearances whilst winning numerous domestic and European trophies. The defender will almost certainly be marked as a Chelsea legend, with fans thankful for his seven years at the club.

Is Hazard on the move?

A question which has been asked consistently this past season is whether Eden Hazard is on the move from Chelsea to Madrid, where it is expected he will be playing next season. Sarri suggested the club must respect the midfielders’ decision on his future but is hopeful he will decide to stay at Stamford Bridge.

He was left on the bench at the King Power, possibly for protection ahead of their trip to Baku, yet he was given a brief cameo for 20 minutes, coming on for Willian. The traveling support held up a banner stating ‘Eden Hazard bleeds blue, Chelsea is your home’ and it is clear they want the 28-year-old to stay in London.

It seems the Belgian has made his mind up already though and claimed he made a decision a couple of weeks ago. When asked if his future will become clearer after the final in Baku he added ‘I think so. We have a final to play and then I will see.’ Whether the midfielder decides to stay or not, he will no doubt be given a warm welcome in Baku and be remembered as a Chelsea legend, and a Premier League legend at that too.

Vichai Srivaddhanaprabha – the man who allowed Leicester to dream

A special mention must go to the late Leicester City owner, Vichai Srivaddhanaprabha. Following the final whistle at the King Power on Sunday, Leicester players and Aiyawatt, son of Vichai, paraded around the pitch to thank the fans for their support this campaign. It was an emotional affair as the Leicester City fans bellowed out the name of their late owner, who has given them so much since he bought the club back in 2010.

Vichai sadly passed after a helicopter crash following the Foxes fixture vs West Ham back in October of this campaign and the fans have not stopped remembering him since this day. The Thai national has a song devoted to him with fans singing ‘Champions of England – you made us sing that’ and his name will forever be remembered around the streets of the King Power.