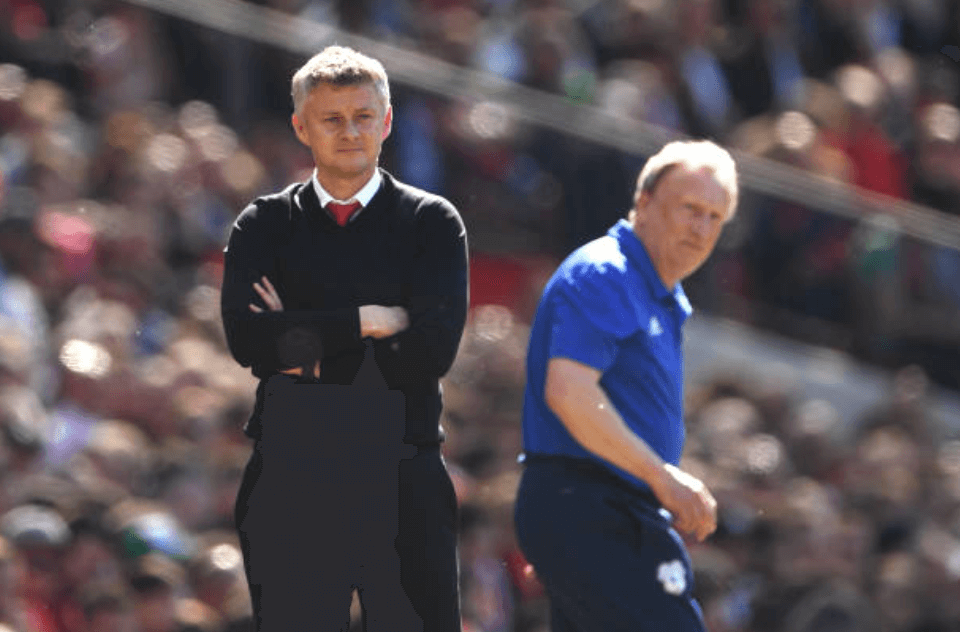 Manchester United were humiliated on home turf as relegated Cardiff City thumped them 2-0 at Old Trafford.

United capped their season off with another abject performance in front of the home crowd in a rather embarrasing defeat to end their campaign. Outside of a few opportunities for 17 year old Mason Greenwood, United never really threatened the Cardiff goal.

Cardiff took the lead in the 22nd minute after Diogo Dalot was judged to have fouled Nathaniel Mendez-Laing inside the area. Replays showed that there was little to no contact between the two players but Cardiff fans won’t lose any sleep after losing out to a number of poor refereeing decisions this season. Mendez-Laing confidently slotted the ball past David De Gea to score his first goal for the club on the final day of the season.

Cardiff doubled their lead not long after half time when Mendez-Laing got his second goal for the club in the 54th minute. Josh Murphy squared the ball to an unmarked Mendez-Laing in the six yard box who passed the ball into an open net after some horrendous defending from United.

United finished the game 32 points off champions, and local rivals, Manchester City while Cardiff were left to ponder the prospect of football in the Championship next season.

A day to forget for United’s youngsters

At just 17 years and 233 days, Mason Greenwood became the youngest ever player to feature in United’s starting line up in a Premier League fixture. The young English forward provided United fans with a sliver lining as he looked lively and could have bagged himself a couple of goals in the first half were it not for some good goalkeeping.

Angel Gomes came on with 15 minutes to go but did little to leave an impression on the game. Having said this, the youngsters showed confidence and ability in front of their own crowd and will likely feature heavily in years to come.

It’s difficult to determine whether a lack of talent, a lack of fitness or a lack of professional pride is responsible for performances like this. United played with all the urgency of a training match even after going one behind and many of the Old Trafford faithful would not be too upset if the majority of this squad was sold in the summer.

Many fans are struggling to respect this United side who put in an absolutely embarrassing performance on Sunday. The upper echelons of the United board have utterly failed in their responsibility to put together a side worthy of Old Trafford and the fact that United’s back four consisted of Chris Smalling, Phil Jones and Ashley Young speaks volumes of the board’s competency.

As well as needing to ship out the deadwood, more talented players such as Paul Pogba and Anthony Martial look utterly disillusioned at the club which leaves United with the question of whether or not to cash in now or face another season of disappointment.

There is no way United can possible perform the surgery required on this side in one transfer window and, as a result, they look doomed to scrap it out for a top six finish next season with the likes of Wolves and Everton.

A Courageous Performance from Cardiff

It’s difficult not to feel for this Cardiff side. Compared to Huddersfield and Fulham, Warnock’s men are full of heart and many would have liked to see them stay up this season. While it is true that they lack the quality and depth necessary to survive the rigors of the Premier League, they have often made up for that through sheer determination and fight.

On the day that Cardiff said goodbye to midfield general Aron Gunnarsson, who leaves to join Qatari side Al-Arabi after 8 years in Wales, the Canaries put in a courageous performance and were deserved winners. Question marks may remain over Warnock’s future at the club but many Cardiff fans will join echo owner Vincent Tan’s calls for their veteran manager to stay on for one more season.

Therefore, Manchester United were the same distance off becoming champions than being relegated which is a rather embarrasing stat for the Red Devils.