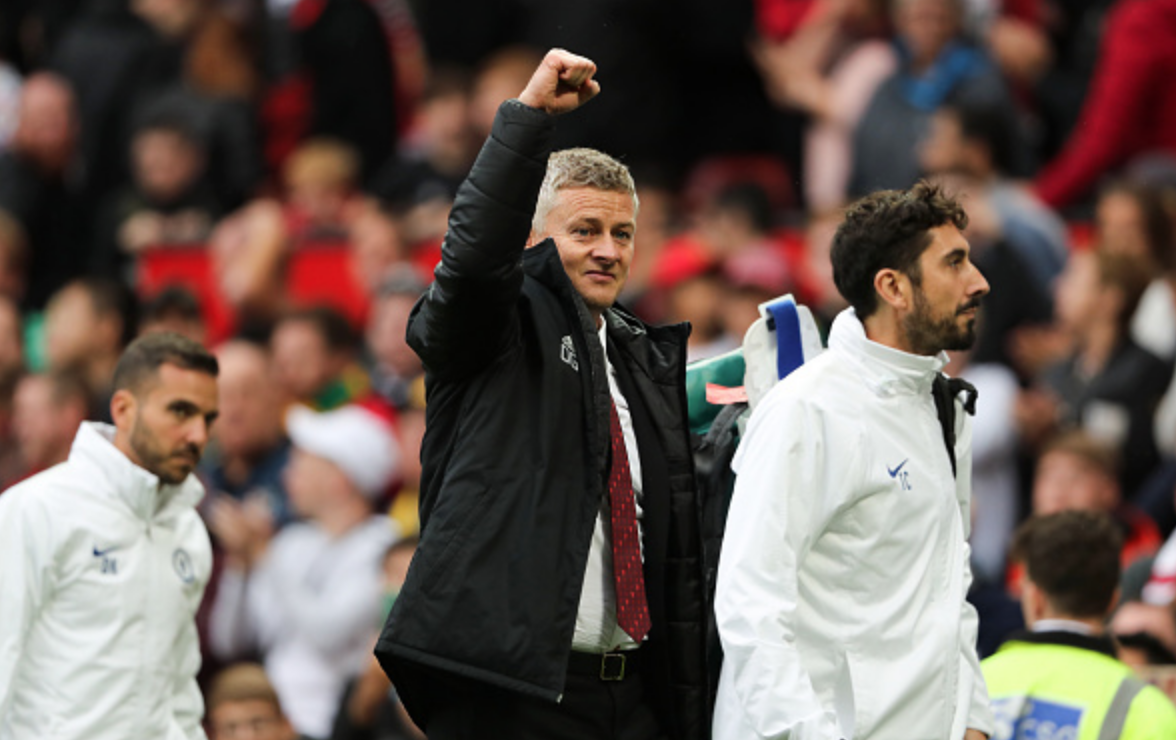 Manchester United emerged victorious at Old Trafford as a Marcus Rashford brace and a goal apiece from Anthony Martial and debutante Daniel James saw Frank Lampard’s Chelsea start the season on a rather sour note.

Chelsea started out brightly and were on the front foot for the first 15 minutes before a woeful tackle from Kurt Zouma on Marcus Rashford resulted in a penalty for Ole Gunnar Solsjaker’s side which was slotted in calmly by Rashford himself. This proved to be a turning point in the game as the momentum shifted towards the home side.

Chelsea were unlucky as they created some good chances and the likes of Tammy Abraham and left-back Emerson came as close as hitting the post. United started the second half on a positive note with Martial and Rashford getting back to back goals within a span of two minutes. The cherry on top was added by new boy Daniel James getting his dream debut coming off the bench to finish off the scoring.

It would be fair to say that the result was a bit unfair on Chelsea and doesn’t tell the true story of the game as the Blues played really well during certain pockets of the game and could have easily scored one or two goals themselves on any other day.

The last-minute sale of David Luiz to Arsenal, Ngolo Kante’s reduced fitness and an injured Antonio Rudiger left Chelsea’s backline exposed and vulnerable. Andreas Christensen partnered Kurt Zouma in the centre with Azpilicueta and Emerson on the right and left respectively. Zouma made several mistakes at the back, the first one being a mistimed tackle which gave away the penalty.

Kante started on the bench due to fitness issues while Rudiger has been recovering from an injury since the end of last season. Their absence was more than evident as a lack of experience at the back saw experienced captain Azpilicueta trying to cover multiple bases which went in vain.

Every time United turned over possession in their own half, they got huge spaces to exploit as the defence had no protection from the midfield which led to Emerson and Azpilicueta moving central leaving space open in their respective positions. Jorginho and Kovacic in the double pivot were not able to do the ‘Kante job’ of retrieving the ball in important positions to start counter-attacks. There was no compactness at the back which is a big concern.

This contest showed us that Lampard has a lot of work to do with his defence and he’ll be hoping for a swift return for Rudiger to solidify that centre back partnership. Kante should be back as well after he came off the bench later on in the 2nd half.

The big money signings of defenders Harry Maguire and Aaron Wan-Bissaka certainly raised a lot of eyebrows but now just after one game, all worries seem to have been put to rest. Both Englishmen were instrumental in shutting out a young and energetic Chelsea attack.

Emerson, Mason Mount and even Ross Barkley had no luck down on the left-wing due to Wan Bissaka’s excellent 1v1 tackling. Granted, the right back’s attacking half work wasn’t the greatest yesterday but he more than made up for it in his defensive work. Maguire, on the other hand, marshalled the backline like a true leader and was not afraid to put his body on the line when needed.

To add to that, the new winger from Swansea, Daniel James got a debut goal as well to cap off a great home debut for all three new signings.

There were a lot of question marks over who would start in the number 10 role (behind the striker) for the Blues before the game. Lampard decided to start youngster Mason Mount with Barkley on the left flank but both of them floated around the box, constantly switching positions. Big money signing Pulisic was left on the bench, much to the surprise of quite a few Chelsea fans.

Mount looked energetic and positive in the first half creating a couple of good chances and even taking on De Gea with a strong shot but Barkley, while energetic wasn’t able to translate his exceptional pre-season form to the season opener.

While this was just one game but it will be interesting to see who Lampard sees as his number 10 in this young Chelsea side. With Willian, Pulisic and Pedro preferred as wingers and Ruben Loftus Cheek spending a lengthy spell on the sidelines due to an injury, it should be a healthy contest for this spot between Barkley and Mount as the season progresses.

Rashford and Martial, the lethal duo?

Anthony Martial started as the lone striker with Rashford on the left flank acting as a support striker, much like Lacazette and Aubameyang in Emery’s Arsenal. But as the game went on we saw Rashford shifting to his preferred number 9 position whereas Martial naturally gravitated towards the left cutting in to shoot at Kepa.

While it was a great performance from the young duo adding 3 goals for their side but it would be very premature to say that United have solved their attacking issues. With Romelu Lukaku sold to Inter and a young Mason Greenwood the only natural striker on the bench, it is safe to say that the red devils would be in trouble if an injury or suspension were to befall either of their two forwards in this long and gruelling season.

All the rumours and questions surrounding Paul Pogba with regard to a move away from Manchester United were forgotten for the time being as he put in a stellar performance setting up Rashford’s second goal and James’debut goal.

He looked back to his usual self pulling the strings from midfield, looking involved in most build-ups and put in some important tackles as well to rob Chelsea of a couple of good counter-attacking chances. The fans will surely be hoping that the Frenchman stays as he will surely play a big role if United were to challenge for the title.

Ole’s men travel to the Molineux next to face a solid Wolves side who started the season with a goalless draw against Leicester while Chelsea will welcome Leicester to the bridge in their next match.