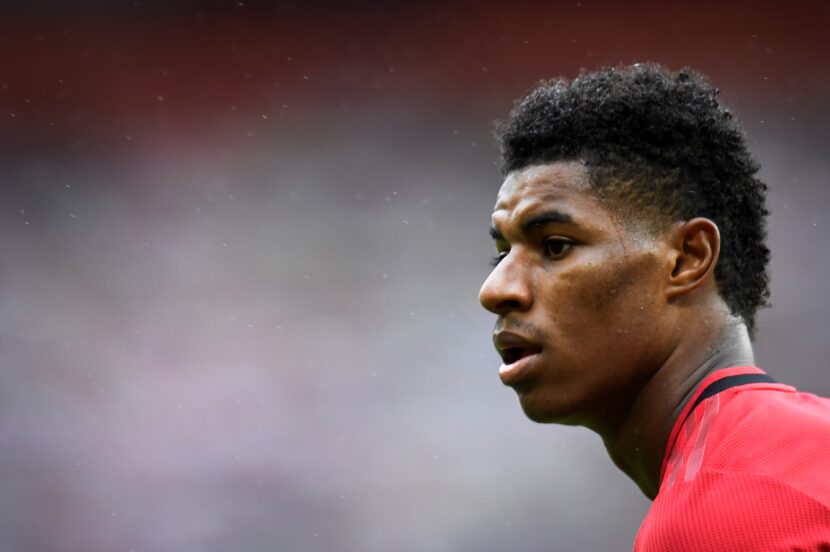 Marcus Rashford: the socially conscious striker who has become a leader at Old Trafford

Where are the on-pitch leaders? It’s an accusation which has been levelled at Manchester United with unrelenting ferocity, the kind of question Roy Keane would blare at his teammates from point-blank range while he had them by the scruff of the neck, now often uttered with anguish and disdain across the Sky Sports desk by their former captain. Yet the man trapped in a 2000’s time capsule couldn’t possibly comprehend that the Red Devils’ softly spoken striker, Marcus Rashford, is the ideal leader for his generation both on and off the Old Trafford turf.

Rashford displayed tremendous intelligence and maturity in his dual role as a footballer and public figure. He stood face to face with the UK’s political representatives on their terms and conveyed his case to the prime minister with an elegance your local MP could only dream of delivering at PMQ’s. Boris Johnson was left with no choice; cornered, he caved under pressure and reinstated the free school meal scheme for the duration of the summer. We should have seen it coming: Rashford has been coolly dispatching his opposition, maintaining a level head while others lose theirs ever since he exploded into professional football’s existence at the age of 18.

It almost seems as though the now 22-year-old’s career was born into chaos. His debut against FC Midtjylland was as remarkable as they come. Called upon at the 11th hour, the striker exceeded all expectations and repeated the feat just three days later against Arsenal; he’s been sparing his hometown clubs’ blushes ever since. Had he been born a decade earlier there’s a likelihood Sir Alex Ferguson would have never required Cristiano Ronaldo’s services. Why would he when a teenage academy graduate had the same electrifying pace and close control, with a poacher’s eye for goal that had the potential to be groomed into a player with the calibre of the Portuguese world-beater.

Instead, the Englishman has endured Manchester United’s most turgid years since their former managerial maestro departed the North-East. Despite rudderless recruitment and a myriad of managerial errors, the forward has continued his upward development trajectory, to the point he has become the Red Devil’s most important asset. In 201 appearances the academy graduate had 64 goals, 0.31 per game, only narrowly behind the pace set of legends Mark Hughes and Sir Bobby Charlton. Before the interruption this was also the England international’s most productive season to date finding the net on 14 occasions in 22 Premier League matches, and this could yet be the campaign Rashford breaks the 20-goal mark for the first time in his career.

Furthermore, Ole Gunnar Solskjaer’s reliance on the striker has been typified by how Rashford continued to play despite suffering from acute pain for weeks around the turn of the year, which was revealed to be a double stress fracture in his back. The forward also had a piece of floating bone in his ankle, which required non-invasive surgery to remove only serving to highlight further how impressive his displays this term have been given the circumstances. Understudy Mason Greenwood’s emergence has been one of the few success stories at Old Trafford this season. Still, when Rashford is unavailable the teenager, and Odion Ighalo’s presence at centre forward, highlight how woefully meek Manchester United’s central attacking options are.

At the other end of the pitch, centre back was a critical area Manchester United’s recruitment focused on over the summer transfer window. Maguire arrived from Leicester City for £80m, a world-record fee for a defender. Upon his arrival Maguire was instantly handed the armband, adding further fuel to the fire that the Red Devils squad lacked leaders. However, leadership comes in multiple guises, and even without the armband inspiring those around you through performance can often be the key to getting the best out of teammates.

There is said to be three types of leader, authoritarian, democratic and laissez-faire. Keane and Ferguson fall into the first category and their combustible nature combined with an unwillingness to back down was a fundamental factor in the Irishman’s Old Trafford demise. Laissez-faire is arguably Solskjaer’s style as a manager, prioritising a hands-off approach which proved to be particularly effective in the aftermath of Jose Mourinho’s granular micro-management.

Yet once the initial relief of being freed from Mourinho’s shackles wore off, Solskjaer’s inadequacies have become exposed. Within the dressing room, Rashford has the capability to spearhead the squad democratically, he can use his close relationships with other key squad members to promote collective thought and creativity from within, yielding more substantial commitment. To succeed Rashford needs the support of those above him to recruit and aid in moulding a winning mentality throughout the squad. Bryan Robson was nicknamed “Captain Marvel”, but he didn’t taste Premier League success until his final two seasons of a 13-year spell with the Red Devils.

If winning is a habit, then failure must also be, transforming stagnation to success is arguably the most challenging process in sport. Jurgen Klopp has achieved the feat of altering Liverpool’s status as Premier League nearly men after 30 years of coming up short. Even then, the German tactician has taken five years to complete the alteration process. Only time will tell if Rashford can guide Manchester United to a 21st league crown, but if he does fire them to domestic victory his case as one of the Red Devil’s greatest leaders of all time would be almost irrefutable.