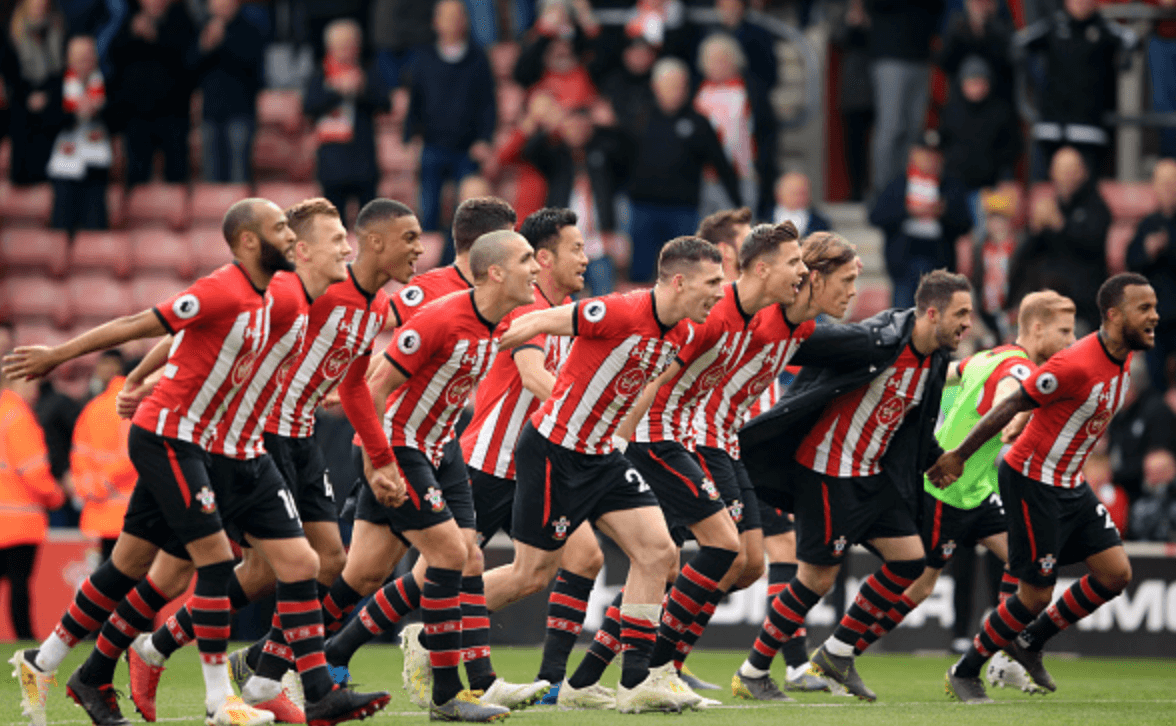 Ralph Hasenhuttl ecstatically celebrated a Nathan Redmond double and a Shane Long goal which saw off a brief Wolves fight back from Wily Boly’s equaliser.

The victory over the Midlands club will all but confirm Southampton’s Premier League status as it pushes them eight points ahead of relegation zone with the last spot occupied by Cardiff. The result means that Wolves fail to go three points clear of closest Europa contenders Leicester.

Southampton went in at half time 2-1 up thanks to a Nathan Redmond double with his second coming moments after Boly equalised for Wolves around the half hour mark. Redmond and Josh Sims linked up well for the first with Redmond starting the move by finding Sims out wide before sprinting a 40-yard run to put himself on the end of Sims’ low driven cross and smashed the ball high into the net at the near post.

Wolves responded and began applying pressure on the Saints defence before Boly towered above Southampton’s defenders to meet Joao Moutinho’s corner and send the ball into the far corner of the net.

Sims got involved once more during the build-up to Redmond’s second and instantly replied to Wolves equaliser. He laid the ball through to Danny Ings who timed the pass perfectly to Redmond, which he calmly controlled and dinked the ball over Rui Patricio.

Sims continued to terrorise the Wolves defence and should have assisted Ings with a simple pass as well as potentially getting on the score-sheet himself but failed to hit the target.

The visitors started the second half the better of the two, putting the home side under pressure and creating threatening chances. The biggest chance fell to Wolves’ newest permanent signing and impressive frontman, Raul Jimenez. A looped ball was put into the Saints’ area into the path of Jimenez, but his volley flew wide from only eight yards out.

Not what you’d expect from the Mexican and he was made to rue his miss as Shane Long poked in a scrappy corner, scoring in consecutive Premier League games for the first time in nearly three years giving Saints a two-goal advantage.

The Irishman’s goal was too much for Wolves as they gave up the chase letting their prey take the vital victory which could be enough to see the Saints hold on to their Premier League status. Wolves have failed to capitalise on other results and gain an advantage on teams competing for a Europa spot and extended their away winless run to five.

While wide man, Nathan Redmond, has been a regular in Southampton’s starting line up since he joined from Norwich City back in 2016, Josh Sims was rewarded with his first start this season for the Saints in a crucial game in their fight for survival, proving Hasenhuttl’s confidence in the young English winger.

Despite Redmond being around for some time, he is only 25 years old and could become the club’s most influential player since Hasenhuttl has revived his form.

After this fixture, Redmond has eight goals for the season and Sims was importantly involved in the build up to both of Redmond’s goals. Redmond certainly has upped his game under the new management and has become a vital part in Southampton’s success and their style of play.

The Austrian manager and Redmond’s relationship has grown, and the boss was singing his praises referring to his qualities in dribbling and impact against the big teams. Despite being critical initially, he feels they have found mutual ground and they are building on his skills and confidence together. Redmond has always been an important player to Southampton with the new boss agreeing and ensures he is on the team sheet every week.

Josh Sims made his first appearance for Southampton back in 2016 but has failed to cement his spot in the squad and only featured 13 times since that first appearance. He has only made four appearances so far this but impressed in today’s game against Wolves. On the opposite wing to Redmond, he added to the pace and another offensive outlet.

Whereas Redmond likes to cut in, Sims will drive to the by-line, opening defences from behind. Sims provided the assist for Redmond’s first today after a great run from the youngster. These final games of the season are crucial for Sims to prove himself and become a regular starter in Hasenhuttl’s squad for next season.

Willy Boly has had a tremendous first season in the Premier League. Most newly promoted defenders struggle to prove themselves to be a real rock in defence while contributing to the attacking statistics. Boly has been outstanding in both departments for Wolves.

He is a vital part in Wolves’ Plan A, but their lack of an attacking Plan B relies on their organised defence and a goal to come from somewhere. Four times this season Boly has managed to find the net and it’s usually in games like today where the attacking outlet for Wolves underperform.

While his defensive partner Conor Coady captains the side and has featured twice more this season than Boly due to his red card suspension and injuries, Boly has managed to have eighteen shots, with six on target and four goals. On top of this, Boly has had one less clean sheet, mustering up six but has conceded five fewer goals than Coady, letting through 36.

His defensive statistics continue to trump his captains in blocks, interceptions, tackles, clearances, aerial battles won but loses out to Coady in own goals, with the skipper having three compared to Boly’s duck.

Boly’s goals earned a draw against champions Manchester City, an undeserved draw in the last minute against Newcastle and got them level against Spurs, with Wolves going on to win that game. His goal today shows he is one player who can be another attacking outlet for Wolves when their offensive line is misfiring.

However, this is concerning for Wolves as this has been an issue throughout the season. Despite their amazing year, their consistency has let them down. Their lack of a Plan B has let many winnable games turn to losses and has seen them remain in the battle for a European spot when it could have been wrapped up. The French 28-year-old cannot surely continue to come to Wolves rescue. The summer transfer window could be a great opportunity for Wolves to develop a plan B.

The Fight, For Europe And Survival

Obviously with the home side taking all three points, Wolves visions of competing in Europe took a dent. While Nuno Espirito Santo’s men are sitting eighth, level on points with seventh place Leicester, this loss means they failed to leapfrog the Foxes by three points.

However, that’s not the worst of it. The team that dramatically ended Wolves’ FA Cup dream in the semi-final defeat last weekend, Watford, have a game in hand and are only one point behind. Wolves could be two points from seventh and on worse goal difference come the end of the weekend.

One more win for the Saints should be more than enough to see Southampton survive as Cardiff must face Liverpool, Manchester United and Brighton while the Saints play Newcastle, Watford, Bournemouth, West Ham and relegated Huddersfield.

With the safety mark usually being 40 points, this victory will finally allow the Saints and Hasenhuttl see out the remainder of their season with confidence that they will be a Premier League side next season.

Man of the Match – Nathan Redmond

Two goals for the winger meant that Redmond well and truly left his mark on the game. He continues to be Southampton’s key man going forward and his brace has not only won his side the match but almost guaranteed that his team will be playing Premier League football again next season. 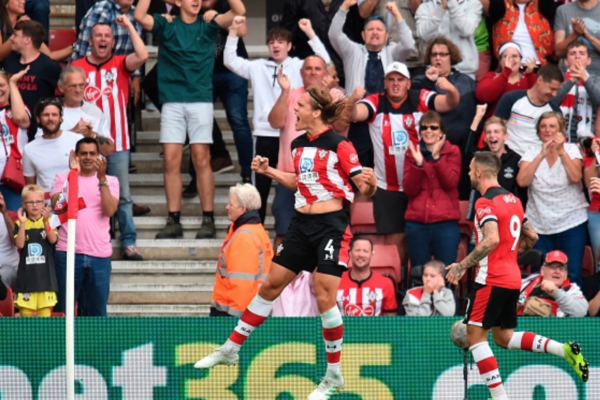