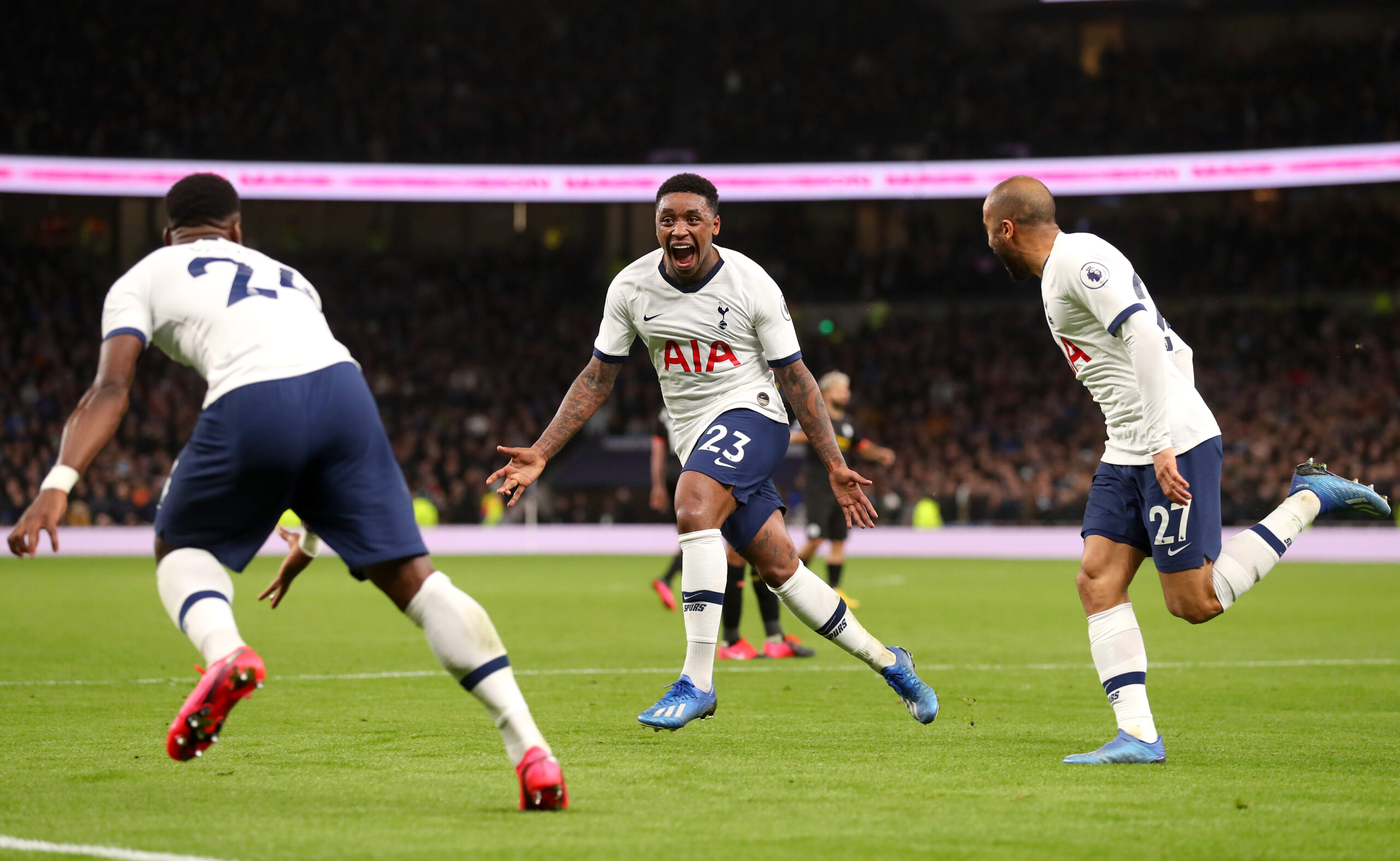 Tottenham Hotspur secured their most significant result of the Jose Mourinho era with a 2-0 win over Manchester City as goals from debutant Steven Bergwijn and Heung-min Son gave the Lilywhites a vital three points in their bid to ensure Champions League qualification.

As players went flying into tackles, the question of their own safety became prevalent. Most notably, Raheem Sterling went in late and significantly high on Dele Alli’s shin, and how Kevin Friend saw the replay and concluded that the on-field yellow card sufficed remained an unanswered question from the opening stages in North London

City were later awarded a penalty by the video assistant. Ilkay Gundogan then connected with possibly his worst ever penalty attempt, as Lloris saved comfortably. Replays showed him taking out Sterling, who was first to the rebounded ball. Another VAR check proved unfavourable for City, and Zinchenko and Alderweireld saw their names taken for the mini-brawl that ensued.

Sergio Aguero had a couple of good chances, his first being turned onto the post by a sliding Alderweireld, and his second hitting the side netting from an explicable distance.

The second half saw an even more determined Tottenham side walk out of the tunnel, and while they still threatened minimally on the counter, their defensive efforts became much more formidable. Harry Winks led a break-away that saw Zinchenko receive his second yellow for stopping the counter. This gave Tottenham a much-needed mental boost, and their game scaled to new heights. Bergwijn scored a sumptuous volley two minutes after Zinchenko saw his marching orders, and Heung-Min Son doubled Spurs’ joy shortly after.

Some poor ‘see-out-the-game’ tactics at the death led to a few scares for Spurs, but lady luck was on their side, as deflections found their way to the post, and not the back of the net.

All in all, it was a well-fought and arguably a deserved win for Tottenham Hotspur and Jose Mourinho; a result that leaves the North London side in fifth, just four points adrift of fourth-placed Chelsea.

Bergwijn excels after baptism of fire

Steven Bergwijn signed for Tottenham Hotspur from PSV Eindhoven in the January transfer window for a reported £27m fee, and the Dutch international marked his arrival with a spectacular strike to firmly cement his name in Mourinho’s selection dilemmas for the remainder of the 2019/20 campaign.

A deftly weighted cross from Lucas Moura was met by Bergwijn, who chested the ball down and struck a fine strike beyond the reach of Ederson to send the home crowd into raptures.

Wild celebrations ensued – befitting of both the significance and quality of the goal – as Spurs confirmed their intentions to charge and chase for Champions League qualification whilst also contributing to City’s demise, moving Guardiola’s side further and further from the mercurial Liverpool who now sit 22 points adrift at the top of the Premier League table.

Officiating and VAR remain a hot topic in the Premier League

The first half saw Raheem Sterling go in very high on Dele Alli’s shin, and Mike Dean initially awarded a yellow card to the City player. However, an official VAR check was prompted, and the decision communicated was to stay with a yellow card, which evidently prompted the officials to think that no ‘serious foul play’ was involved.

Alli stayed down for nearly five minutes as the medical staff rushed onto the pitch, and was moving gingerly for the entirety of the first half.

This prompts the question; how serious does serious foul play need to be for a player to be penalised? It is a well-documented fact that the Premier League is physically the toughest in the world, but that toughness must not come at the expense of players’ safety. Some practical concern for safety, and indeed some accountability is needed.

Manchester City were awarded six corners at the Tottenham Hotspur Stadium but looked to threaten from exactly zero of them. In fact, one of the corners was so poor that Oleksandr Zinchenko was forced to sacrifice himself for his team to keep the score level.

Manchester City hired a set-piece specialist from Brentford earlier this season, and while some creativity has been evidenced on occasion this season, those occasions have been few and far between.

All title-winning teams need to be proficient at converting set-pieces. And on occasions when City just cannot find that final pass, or apply that finishing touch, a set-piece can be the thing that puts them over the line. Put simply, it is an area of their game that certainly needs improvement if they are to push Liverpool for the Premier League title in next season and beyond.

How does Pep motivate his players?

When Pep Guardiola named his starting XI, the midfield pairing of Rodri and Ilkay Gundogan would understandably have raised eyebrows within the Citizens’ fanbase. While the former helped out the side when called upon, the latter contributed by shooting an exceptionally poor penalty, and skying the ball when an open, unguarded net beckoned just six yards away.

Pep’s refusal to take him off prompted further frustration, as City looked to score the perfect goal, complete with a penetrating pass in behind, and a swift cut-back into the penalty area to be tapped home by an onrushing attacker. It was déjà vu once more, as City’s attempts to pull level were crushed by a well-taken strike from Son.

With the league title gone, and a two-legged tie against Real Madrid fast approaching, Pep needs to get his tactics on point. More importantly, he needs his players to play for the shirt, and regain that enthusiasm that they had against the likes of Atalanta. Right now, man-management seems to be of paramount importance, with leaders like Vincent Kompany no longer members of the dressing room.

Pep needs his players firing, but more importantly, fired up again. And he also needs to stop starting Gundogan and Rodri together in midfield, as it is a recipe for disaster.