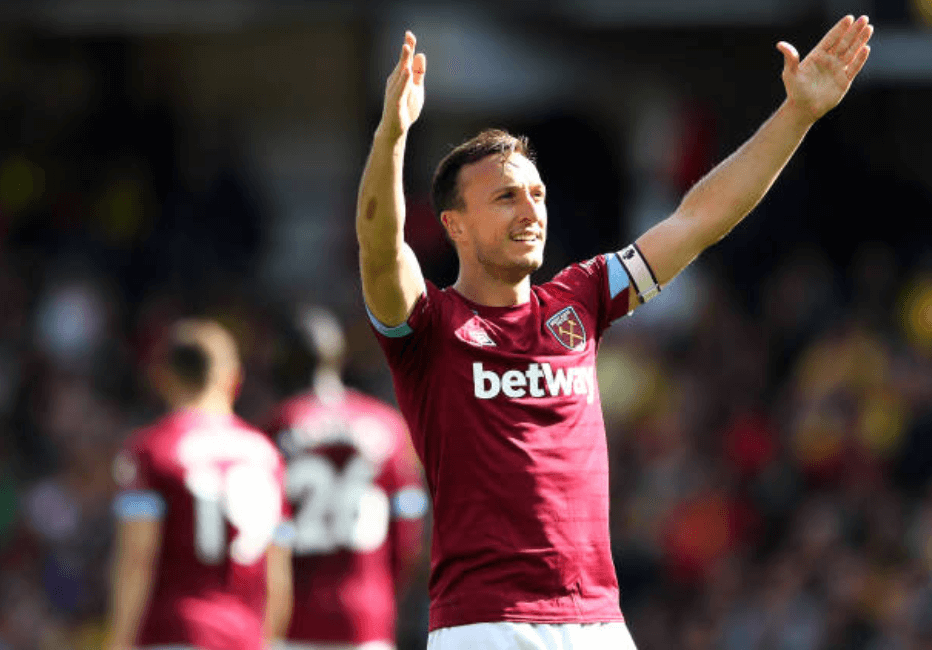 A brace from Mark Noble and goals from Manuel Lanzini and Marko Arnautovic made sure West Ham finished the season in the top ten of the Premier League – the first time they have managed the feat since moving to the London Stadium.

The victory for the Hammers meant they overtook their hosts on Sunday, as Watford slumped into the bottom half, despite a successful season. It was Watford who started the better of the two sides too yet the Hammers took the advantage at Vicarage Road. Mark Noble played a nice one-two with Michail Antonio and then dummied the ball past Kabasele and neatly tucked the ball into the bottom left-hand corner of the goal.

Watford tried to drag themselves level but with no avail and it was West Ham who made the most of their chances as they doubled their lead. Antonio was at the heart of the action once more as he beat two defenders and cannoned a shot onto the crossbar after a save from Foster. Manuel Lanzini was the first to react and he headed the loose ball in the empty net – his first goal since the last game of last seasons campaign.

Watford did get themselves back into the game early in the second half after Pablo Zabaleta’s horrific back pass which Gerard Deulofeu latched onto and rounded Lukasz Fabianski to give Watford hope of a come back.

This hope however was quickly dampened as Jose Holebas was shown a straight red card for pulling Antonio down just outside the box. Referee Chris Kavanagh deemed that it was a clear goal-scoring opportunity and sent the Greek for an early bath. Watford did stay in the match after the red card and had three different penalty appeals waved away, yet none were given just exemplifying that it wasn’t their day.

West Ham eventually made the extra man count though. Marko Arnautovic poached a goal on the seventy-second minute as he tapped home his tenth goal of the season, latching onto Felipe Anderson’s effort which hit the post after a fine strike from Pablo Zabaleta.

The goal scoring was then capped off when Kiko Fermina brought down Antonio in the box for a clear penalty. West Ham captain Mark Noble stepped up and coolly slotted in his second and West Ham’s fourth of the afternoon.

Watford would be forgiven for keeping an eye on the FA Cup final against Manchester City this coming Saturday, hence why their performance might not have been up to scratch. The Hornet’s however will be relieved to know that Jose Holebas will be available for selection after his red card was rescinded on Monday.

The defender is not well known for his discipline and picked up 12 yellow cards during the 38-game campaign. Yet the red he received on Sunday has fortunately been overruled and the Greek defender will be present at Wembley come Saturday.

After the match, Adrian and Andy Carroll appeared to wave goodbye to the West Ham fans. There has been much speculation regarding both of their futures, but both would appear to be seeking a move away from West Ham.

Carroll’s partner Billi Mucklow appeared to confirm this last week when she posted on her Instagram a photo of their family captioned “Farewell West Ham”. Carroll has suffered from massive injuries during his time at West Ham yet the Geordie has appeared in 126 games for the club and scored 34 goals during his time in London.

Adrian, however, has played second fiddle to ‘Hammer of the year’ Lukasz Fabianski. The Spaniard appears to be set on a return to Spain in search for first team football. The goalkeeper made 125 appearances for the Hammers and has become a cult hero at the club.

Mark Noble shows his worth

For years West Ham fans have called for Noble to be given England call-up, these calls have all fallen flat. Since the midfielder turned 30-years-old fans opinion on him have changed from month to month. The former England under-21 captain has re-silenced those critics in recent weeks since his ‘Pirloesque’ performance against Tottenham Hotspur. His performance on Sunday was capped off with a brilliant solo goal and a trademark penalty – a captains performance for sure.

After a terrible start to the season in which West Ham lost their first four games, Pellegrini has really improved the Hammers and steadied the ship. This season Pellegrini’s team have scored more goals and conceded less compared to last term. As a result, the Hammers found themselves two places higher up in the table as they climbed from 12th place to 10th – the second greatest improved side in the league in terms of points (10). Only Liverpool gained a bigger points improvement from last years campaign.

Bottom half finish for the Hornets

For most of the season, Watford have been pushing Wolves for seventh place in the league. The Hornet’s however have fallen away in the last third of the season, losing five of their last six games. Manager Javi Gracia will be positive though as his team are in a cup final which if they win will put them in the Europa League next season.

With the transfer window opening soon, Watford could add to their strong squad and they could make a real push for top half next season.

Man of the match: Mark Noble

The West Ham captain was brilliant at Vicarage Road and ran the midfield all afternoon. He scored a brilliant solo effort for his first goal, dribbling and dummying his defender before finishing into the bottom corner. The Englishman also scored a trademark penalty, becoming West Ham’s second highest goal scorer (42) in the Premier League second to Paolo Di Canio (49).

Michail Antonio also gets a mention as he was also brilliant, the winger was instrumental in the first two goals and won the penalty for the fourth goal.