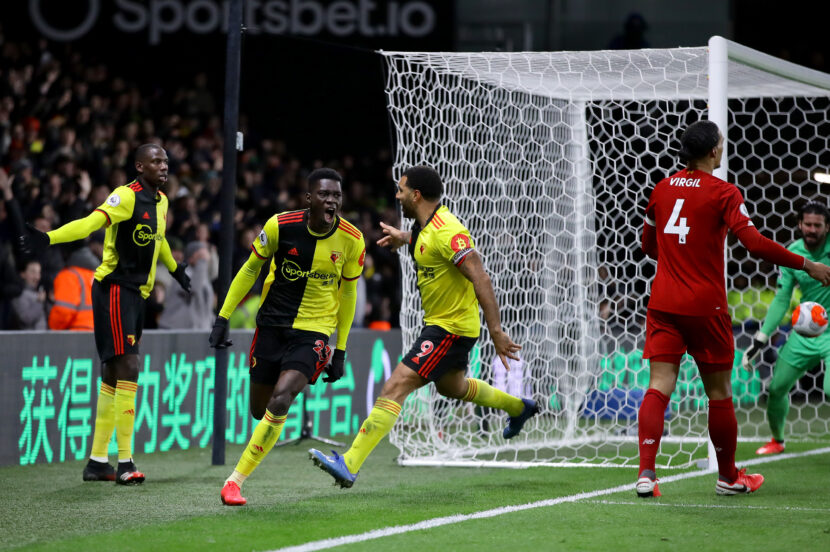 Liverpool’s remarkable unbeaten run came to a dramatic end on Saturday evening as they were stunned by an inspired Watford side at Vicarage Road.

The 3-0 scoreline was not an unjust one either. The Hornets were the better side in the first half, despite failing to find the back of the net, before producing a ruthless performance to kill off the Premier League leaders. The xG of 2.7-0.2 proves that Watford were fully deserving of the three points.

It was an error-strewn performance from the Reds though, who looked vulnerable at the back all game. Dejan Lovren came in for the injured Joe Gomez and the Croat looked immediately out of his depth. Troy Deeney even admitted after the match that he targeted Lovren in order to avoid getting in a battle with Virgil van Dijk.

After the goalless first half, Deeney’s physical dominance of Lovren led to the opener for Ismalia Sarr. A long throw into the box bounced in front of Lovren, with Abdoulaye Doucoure stealing in to fire across goal for Sarr to finish from close range.

The hosts continued their dominance and it wasn’t long before they doubled their advantage. Deeney again was instrumental, sliding in a superb through ball for Sarr to run onto and chip the onrushing Alisson with the calmness of a veteran striker.

Liverpool managed to quell the yellow storm, and nearly halved the deficit when Adam Lallana’s superb volley from 25 yards out hit the post with 15 minutes to go. Had it fell the other side of the post, then maybe we would be talking about the resilience and resolve shown by the champions-elect.

However, a poor back pass from Trent Alexander-Arnold was intercepted by Sarr, who laid the ball onto Deeney to add the third. The Watford captain still had a lot to do but his assured strike evaded Alisson and Van Dijk and ensured three vital points for the relegation battlers.

While everybody will be talking about Liverpool no longer becoming the second set of invincibles, all of the credit should go to Watford. The Reds were not at the races, but how many times have Jurgen Klopp’s side performed poorly but gone on to win this campaign? The Hornets were outstanding, inspired by the brilliant Deeney, and deserved nothing less than the three-goal victory.

Lovren not up to the challenge

It isn’t the first time that Dejan Lovren has been made to look silly as a Liverpool player, and it probably won’t be the last. Other than the first goal, he wasn’t shocking for the full 90 minutes, but you could see the panic that his presence was creating in the Liverpool defence.

In Gomez’s absence, it was surprising to see Lovren selected over Joel Matip, who was in imperious form earlier this season. It will also be interesting to see who Klopp selects at the back for Liverpool’s visit to Chelsea in the FA Cup on Tuesday night.

Deeney and Sarr can fire Watford to safety

There was a touching scene following Liverpool’s 2-0 win over Watford in the reverse fixture when, at the end of the game in the tunnel, there was footage of Sadio Mane telling Deeney to look after Sarr, who he claimed was shy and needed looking after. Since that moment, Sarr has scored four goals and provided three assists in Watford’s eight Premier League matches. He has formed a formidable partnership with stalwart Deeney, and the two have the firepower to take Watford away from the relegation zone.

Henderson absence key for the Reds

Nobody can argue that Jordan Henderson has been immense for the Reds this season and is a huge reason for the 22 point gap that separates Liverpool and Manchester City. However, the injury lay-off that will see him miss the next three weeks has come at a crucial time for his side, and his absence was certainly felt. The way that Liverpool crumbled in the second half was reminiscent of the earliest days under Klopp. The Anfield faithful will be hopeful that this is a temporary blip and not something that could derail their season.

Consistency the key for Watford

Nigel Pearson will understandably be delighted with his side’s excellent showing on Saturday but knows that their next few games are even more important if they are to avoid the drop. The Hornets have a number of very winnable games remaining, but as this result shows, the Premier League is a competition where even the very best are capable of being beaten by anybody.

Liverpool travel to Chelsea in the FA Cup fifth round before hosting Bournemouth on Saturday whilst Watford travel to Crystal Palace in another important match for Pearson’s side.