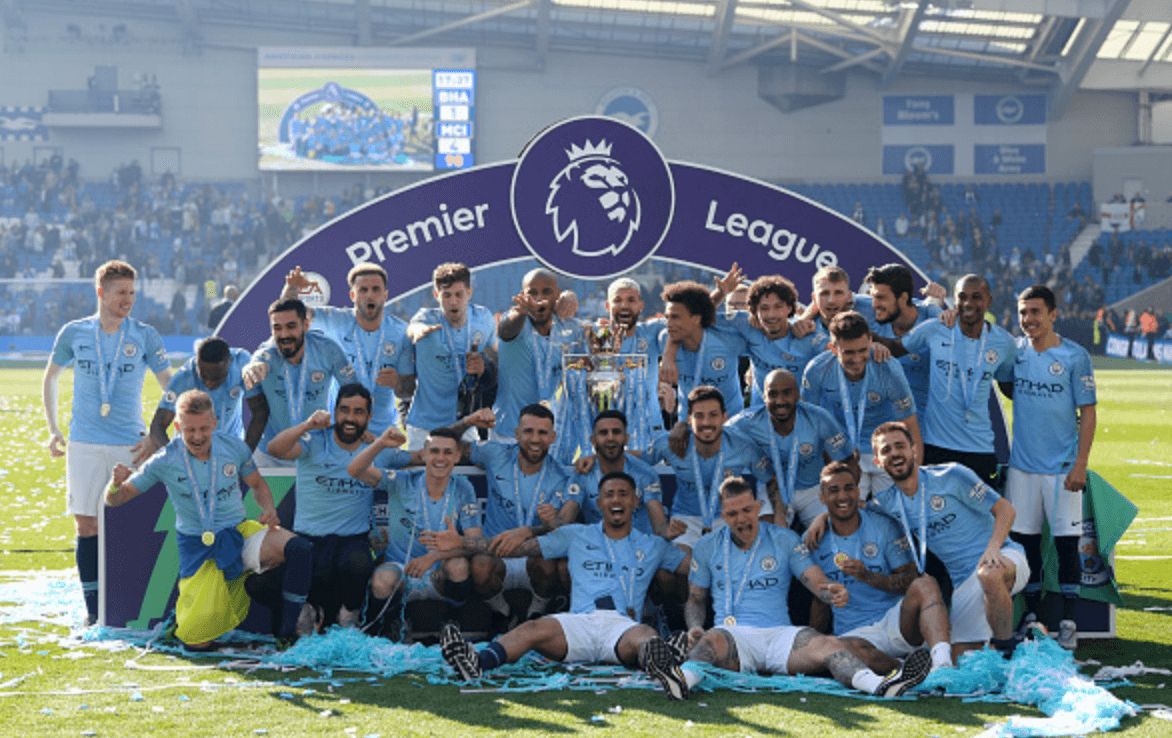 Manchester City are the 2018/19 Premier League champions after coming from behind to beat Brighton and Hove Albion at the Amex.

City’s 14th consecutive league victory took them to 98 points – the second highest ever points total in the Premier League era behind their total last season – finishing a point ahead of Liverpool, who beat Wolves 2-0.

The afternoon was not all plain sailing for City, who briefly trailed to Glenn Murray’s 15th goal of the season after 27 minutes. Crucially however, they hit back immediately through Sergio Aguero and after Aymeric Laporte put them ahead from a corner, they never looked like relinquishing the lead.

Excellent second half finishes from Riyad Mahrez and Ilkay Gundogan put the gloss on a fine performance that rendered Liverpool’s result academic and ensured City became the first side to retain the Premier League title since Manchester United in 2009.

In the opening exchanges, manager Pep Guardiola looked increasingly tetchy as his side were frustrated by a well-drilled Brighton defence.

His manner perhaps translated to his players, who were also not helped by the added pressure of a Liverpool goal that had the home fans bouncing and creating an electric atmosphere.

When Glenn Murray forced home just before the half-hour mark, hearts sank as a shock appeared firmly on the cards. Fortunately for City – whose travelling support included Noel Gallagher – the response was instant, Sergio Aguero steering home from a move direct from kick-off.

Understated Frenchman Aymeric Laporte put City ahead 10 minutes later, expertly finishing a corner, before the second half beauties from Mahrez and Gundogan.

Mahrez’s effort went some way to justifying his surprise inclusion in the starting lineup, while Gundogan’s freekick may come to be the German midfielder’s final goal in a City shirt, with rumours of a summer exit circling the media.

The scoreline shows how dominant a performance it ultimately was, with the Citizens showing once again that they can handle the highest pressure.

It has been another stunning season for Manchester City’ whose only complaint can be their quarter-final Champions League exit to Spurs in April.

In sealing the league title against the Seagulls, City also confirmed they will end the season with at least two trophies, with an FA Cup final against Watford to come next Saturday. Will they make it three?

Brighton bid farewell to Bruno after a roller-coaster season

After something of a roller-coaster campaign, Brighton fans can rest and look forward to a third consecutive season of top-flight football next season.

The Seagulls began strongly, with Glenn Murray firing on all cylinders as the South Coast club looked set to extend their Premier League stay with ease.

But as the likes of Newcastle, Southampton, Burnley and even Cardiff began to improve, Brighton’s form fell off a cliff in March, and though Cardiff were ultimately unable to catch them, Seagulls fans have every right to be concerned about next season.

Despite conceding four at home and losing for the 11th time in the Premier League in 2019 alone, the mood at the Amex did end on a positive note as the club bid farewell to club captain Bruno, who is retiring at the age of 38 after seven years on the South Coast.

The Spanish right-back received a standing ovation as he emotionally left the field in the closing stages, in his 235th appearance in a Brighton shirt.

Having lifted the Premier League trophy for the fourth time, it still remains unclear whether or not Vincent Kompany will be at the Etihad next season.

Despite a brilliant end to the campaign which saw the Belgian start City’s final six games up to now, Kompany’s contract is due to end this summer.

At 33, Pep Guardiola may not see enough worth in handing Kompany a contract longer than a single year, while the City legend will surely demand a longer-term deal if he wishes to continue playing for a number of years.

If recent performances do not evidence it (not least his goalscoring display against Leicester last week), the stats also suggest that Kompany is still among the world’s finest defenders. Of all of the games City have played this season in all competitions, they only failed to win one that Kompany featured in; the 1-1 draw at Wolves in August.

Otamendi and Stones are both tied to the club until 2022, while Laporte’s contract runs until 2025. Almost laughably, there is still another year on forgotten man Eliaquim Mangala’s contract as well.

In addition to those long term deals in defence, with Matthijs De Ligt seeming certain to leave Ajax this summer, Pep Guardiola may convince himself to let Kompany leave if he can secure the funds to challenge for the Dutchman’s services.

Having not featured for City since the 1-0 Champions League quarter-final first leg defeat to Spurs in early April, few expected Riyad Mahrez to start against Brighton, in a season-defining game.

Start he did however, and the Algerian repaid his manager’s faith with a stunning goal after 63 minutes that gave his side the two-goal cushion they craved.

The move to start Mahrez, whose previous displays had been disappointing at best, seemed to confirm City’s gameplan and respect for the occasion.

With Fernandinho out, Kevin De Bruyne only fit enough for the bench and Phil Foden lacking big match experience, Bernardo Silva was brought back into the midfield alongside Ilkay Gundogan and David Silva.

Leroy Sane’s impact from the bench was telling in the recent victories against Manchester United and Leicester, and Guardiola may have had that in mind, with the German seemingly a far better impact substitute than Mahrez in a game where City could feasibly have required a goal in the closing stages.

Despite scoring 11 goals in all competitions, many consider Mahrez’s debut season at the Etihad to have been disappointing and ultimately short of the standard fans expected of a club-record signing.

Mahrez will surely have to up his game next season, as he faces competition in the wide areas of City’s attack from the inspired Raheem Sterling and talismanic Leroy Sane, while Bernardo Silva has also impressed in recent weeks he has been deployed in attack.

Though the title race didn’t contain as much final day drama as in 2012, when City clinched the title ahead of Manchester rivals United thanks to Sergio Aguero, this season’s title race is unquestionably the highest quality that the Premier League has seen, perhaps ever.

Liverpool finished second with 97 points. That is the third highest points total in Premier League history, including 42 game seasons (behind only Manchester City of this season and last), yet they remain empty-handed.

Of course, the Reds may yet win the Champions League, but this season represents yet another cruel example of the title narrowly evading Liverpool’s grasp.

Only two sides have bettered Liverpool’s record of 22 goals conceded in a 38-game Premier League season; Chelsea in 2004/05 (15 goals) and Arsenal in 1998/99 (17 goals), interestingly, Arsenal also failed to win the title that year (their achievement can largely be attributed to the seven 0-0 draws the Gunners played out).

At the other end, the only side to have scored more than the Reds’ 89 league goals and not won the title was Liverpool in 2014. This Liverpool team also now hold the record for the best goal difference (+67) by a side that did not win the title.

In losing only one League game all season to City back in January, the Reds became one of only three teams to have lost one or fewer games in a season. You guessed it, the other two both won the title (Arsenal in 2003/04 and Chelsea in 2004/05).

But for all the unwanted records Liverpool now possess, there are several that City claim as winners. A good place to start is their points total, which would’ve been a record had they not won 100 points themselves a year previously.

In winning their last 14 league games, City also broke the record of 13 achieved by Arsenal in 2002. Their 32 wins in total also equals their record from last season.

In beating every other Premier League side at least once for the second season in a row, they became the first team to achieve the feat since the great Preston side of the late 1880s.

It seems improbable there will ever be a Premier League season with two teams of such quality, but here’s hoping 2019/20 lives up to the expectation.