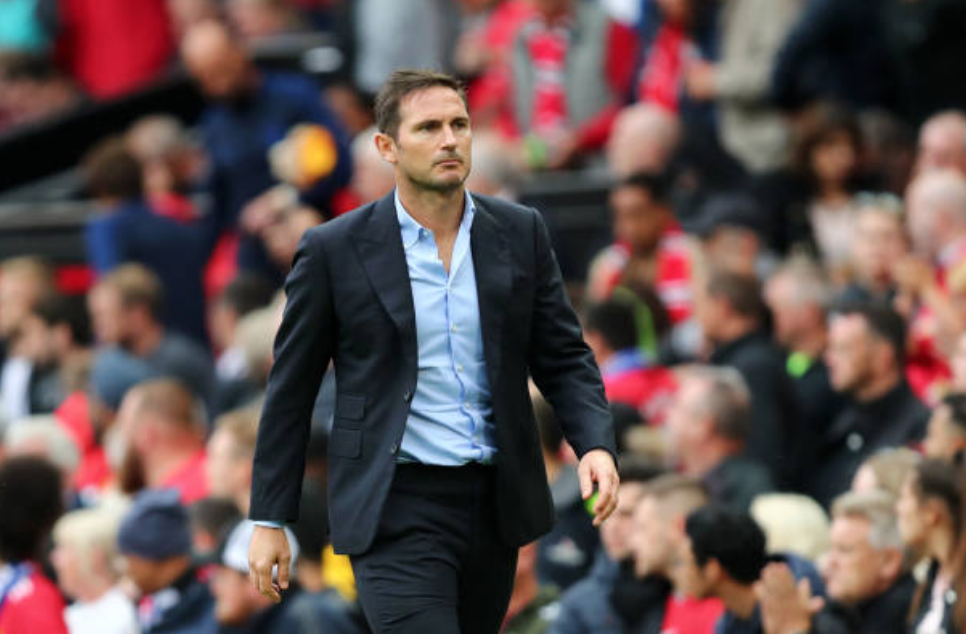 Frank Lampard’s Chelsea were blown away by a ruthless Manchester United on Sunday, as Ole Gunnar Solskjaer’s men ran out 4-0 winners at Old Trafford on the opening weekend of the Premier League.

The Blues had a strong pre-season, in which they beat Barcelona among others and the youthful approach taken by Lampard appeared to be producing results and encouraging performances. However, in the first game of the season, a catalogue of mistakes were punished by their opponents.

The scoreline looks bad, but Chelsea did hit the woodwork three times in the first half; having said this there are some more troubling underlying issues that could prove detrimental this season unless addressed. After the game, Chris Sutton claimed that Frank Lampard has “one hell of a job on.” He also described the situation at Chelsea as: “It’s like going into an Olympic rowing final and being asked to compete in a dinghy.”

A lack of cutting edge

Let’s not get it twisted, the London side played some promising attacking football in the first half in Manchester. However, they lacked the quality to play a key final pass in order to really trouble the United defence. Tammy Abraham fired against the woodwork, as did Emerson – but, these were both carved out through sheer persistence rather than unlocking the defence through quality. Ross Barkley had a clever shot saved by David de Gea too but it was fairly routine for the Spaniard.

It speaks volumes that the best chances fell for left-back Emerson, as he created them for himself through individual perseverance. The issue on Sunday came from midfield. Of course, Eden Hazard departed for Real Madrid this summer, and his 31 goal contributions in the league last season will need replacing by other squad members. 20-year-old Mason Mount was tasked with the role of  ‘creator’ on the opening weekend and the pressure appeared to weigh heavily on his shoulders.

There’s no denying his ability, but he was unable to test the opposition defence. There was a distinct lack of creativity and whenever a chance did come, it was squandered. The margins are fine in the biggest matches, and Chelsea were punished for not taking theirs when they came along.

This is an issue that will most certainly worry Blues fans. There were countless occasions where the ball would try to be worked up from defence, but attacks were halted in their tracks as passes went astray.

Frank Lampard was criticised for opting for youth over experience, leading to their downfall. However, it was equally the more senior members that were unable to lay their imprint on the game. Pedro worked tirelessly to do his defensive duties but gifted the ball straight back to Man United as they pressed high up the pitch.

Similarly, Cesar Azpilicueta struggled to deal with the press, achieving a pass accuracy of just 75% – further up the pitch, Tammy Abraham achieved an astonishingly low pass accuracy of 64.3%. While this may seem as though the forward endured a poor game, this is not the case. There was a lack of movement and few options for the forward. He was constantly wrestled off the ball as he desperately searched for reinforcement, but it wasn’t forthcoming.

The inability to keep hold of the ball is troubling for Chelsea, as it meant they were constantly giving opportunities to the Old Trafford side. And to make matters worse, the Blues’ defence looked shaky at best.

Letting go of David Luiz on deadline day for £8m to a rival? It didn’t really make sense at the time, and it’s even less clear after they were dealt a hammering by United. With Antonio Rudiger out injured, Lampard was left with a back two of Andreas Christensen and Kurt Zouma, an inexperienced partnership – and neither covered themselves in glory.

Marcus Rashford’s movement caused havoc and neither knew how to deal with him. Early on, Zouma played a square ball across the goal, allowing Anthony Martial to have a free shot on goal. He then put in a rash challenge on Rashford to concede a penalty, which, the Englishman duly converted.

This then continued throughout the game and there was a distinct lack of composure throughout. David Luiz is not exactly regarded as the best defender there is, but he brings composure and the ability to start attacks from the back and it’s fair to say Chelsea missed his presence on Sunday.

Tammy Abraham was a threat to a well-organised United defence. However, he was taken out of the firing line and replaced with Olivier Giroud – the Frenchman barely made a contribution however.

It is unfortunate that N’Golo Kante has struggled with injury during pre-season, but his cameo against Manchester United suggested he was fit enough to at least start the game for 45 minutes. But, clearly, he wasn’t. Lampard has now confirmed that he picked up another injury in the game yet the Frenchman played the whole 120 minutes vs Liverpool on Wednesday in the Super Cup which will offer Lampard hope ahead of their home fixture vs Leicester on Sunday.

The decision to play Mount in the attacking midfield role, with Barkley on the wing also proved to be ineffective. Barkley was perhaps the Blues’ best player during pre-season, netting four times and assisting on three occasions. These stats eclipsed the rest of his teammates, however, he was largely neutralised by an impressive Aaron Wan-Bissaka at Old Trafford. Considering his pre-season form, fans might perhaps have expected him to play more centrally and dictate the game, but this was not to be.

Chelsea don’t have time to dwell on this performance and the meeting with Liverpool on Wednesday did see them take the Champions League winners all the way to penalties – only for Tammy Abraham to miss the decisive last penalty. Ahead of their visit of Leicester at the weekend, the main areas for improvement going into the game will be the decision making and holding onto the ball. The side first need to ease their way into the game by keeping possession and building confidence. The service into the striker has to improve and the wingers and midfielders must do a better job of supporting him in order to pose a meaningful threat.

Lampard will be feeling the pressure after their first game and will be hoping his side can be more clinical when chances present themselves.

The manager and Chelsea have plenty to improve upon, and their performance much-improved against Liverpool on Wednesday. The return of Rudiger, Kante and Willian cannot come soon enough in the Premier League as they will bring more solidity and firepower to a frail Chelsea side. Based upon the decisions and the manner of the performance against United, there could prove to be further issues down the road for the London side but time will tell.