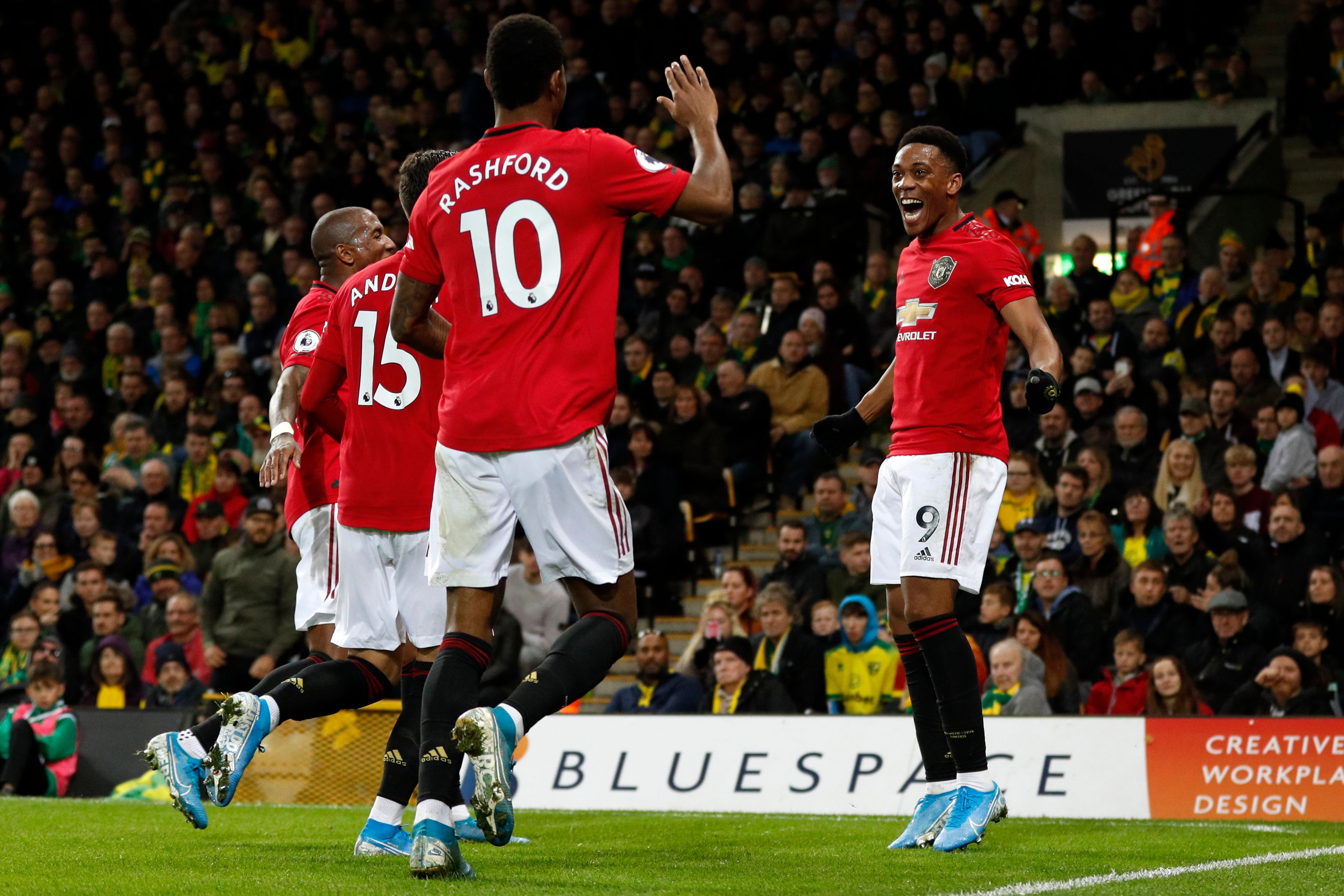 The margin of the Red Devils win could have been greater had United not squandered two first-half penalties, with Tim Krul becoming the first keeper to save two in a Premier League match since Martin Stekelenburg in 2016. Marcus Rashford and Anthony Martial also became the first set of players to both miss a penalty and score in a game in Premier League history.

Norwich never looked like causing the attacking problems they did to Manchester City and with their defence still a shambles, even a Manchester United team enduring their worst start in thirty years took advantage.

Scott McTominay opened the scoring whipping in from the edge of the area after 21 minutes before Rashford saw his penalty saved to keep the score at 1-0. The penalty was only awarded after VAR intervened to claim Godfrey had fouled Daniel James; the decision looked soft at best and totally at odds with decisions made earlier this season.

Rashford atoned for his miss on the half-hour mark though, when played in by James and left alone by Norwich’s defence.

There was still time for Martial to miss a first-half penalty after a Cantwell handball, yet it was Martial who sealed the win on 73 minutes after some sublime interplay with Rashford whose backheel sent Martial through and the Frenchman clipped over Krul.

Norwich grabbed a late consolation as Onel Hernandez became the first Cuban to score in the Premier League. Norwich, however, remain in the relegation zone above only Watford. Manchester United are now seventh but seven points off fourth place before the trip to Bournemouth next Saturday.

The young Scot is fast becoming the heartbeat of this side and Sunday showed why. The midfielder was everywhere with 11 ball recoveries, four take on’s, 86 per-cent successful passes and the crucial opening goal.

McTominay looked at one point a year ago as being too safe a player to impact the game at the highest level but has broadened his game and risk-taking to become arguably Solskjaer’s most crucial player. While comparisons to Roy Keane would be foolish given the Irishman’s superior technical ability and achievements, one noticeable similarity is their ability to improve all those around them.

McTominay’s drive is the best and most consistent thing about this current United team, and with Paul Pogba out until December, Solskjaer will rely on McTominay as the heartbeat for a while yet.

After nine weeks of VAR only getting involved in petty offsides and dubious handballs this weekend saw a seemingly mass lowering of the high bar that constituted clear and obvious.

The first penalty in this game wasn’t as glaring a mistake as the Brighton penalty or Arsenal’s disallowed winner. It was, however, a considerable departure from previous weeks where clear fouls were left ignored as part of the league’s crusade not to have the game re-refereed. But this weekend saw a definite switch in policy and the decision by VAR to call Godfrey and James’ collision was a clear example of one referee valuing his own opinion more than the on-field referee. If the league won’t allow a collaborative approach and the referee to use pitchside monitors they needn’t have bothered with VAR at all.

There is something to be admired in Farke deciding to play his Premier League season as he did his Championship winning season.

His attacking style has already brought one landmark win against champions Manchester City, and his use of Jamal Lewis is a particular delight. But Norwich look destined for the drop, they have now conceded the second-most goals (24) in the league and only Norwich fans can say whether Farke’s approach is correct. Still, after deciding not to change his approach one thing is for sure – the rest of the league won’t care as they’ll demolish them.

The return of the enigmatic Frenchman to the lone striker role seemed to have re-energised the United attacking strategy. It also means since Solskjaer took charge, they have won nearly four times as many games when Martial plays compared to when he doesn’t.

When Martial plays wide, he has a tendency to wait for the ball and make off the ball runs, playing him upfront alone seems to force him to become a mobile unselfish modern forward and seems to free up Marcus Rashford. With Daniel James maintaining his impressive start, the United front line was superb, and Martial’s mere presence would have been the main factor. That he sealed the win with an exquisite chip from a Rashford back heel suggests United’s prosaic attacking form may be at an end.

Even a broken penalty taker is right twice a day

Manchester United were awarded their sixth penalty of the season on Sunday. That is already more than in 20 of their previous Premier League seasons. They have also laughably missed four and even more bizarrely, those misses are now spread over three players.

Rashford, Pogba and Martial were all on the pitch when Rashford scored against Chelsea and missed against Crystal Palace. All three were also on the pitch to see Pogba miss against Wolves. Quite how a team who presumes be elite is still making penalty decisions on the hoof is bizarre. If Solskjaer thinks Rashford is the best penalty taker why was it taken off him after one miss?

Who takes the next one? Is it now randomly assigned? One thing is for sure Solskjaer doesn’t know, and when his spell comes to an end this may be one of the examples alongside refusing to park in the manager’s car parking space out of deference to Alex Ferguson as to why it didn’t work out.

The Red Devils face two away fixtures on the trot as they travel to Stamford Bridge for some mid-week cup action before traveling to the Vitality. Norwich also travel to the South Coast on the weekend as they face Brighton.