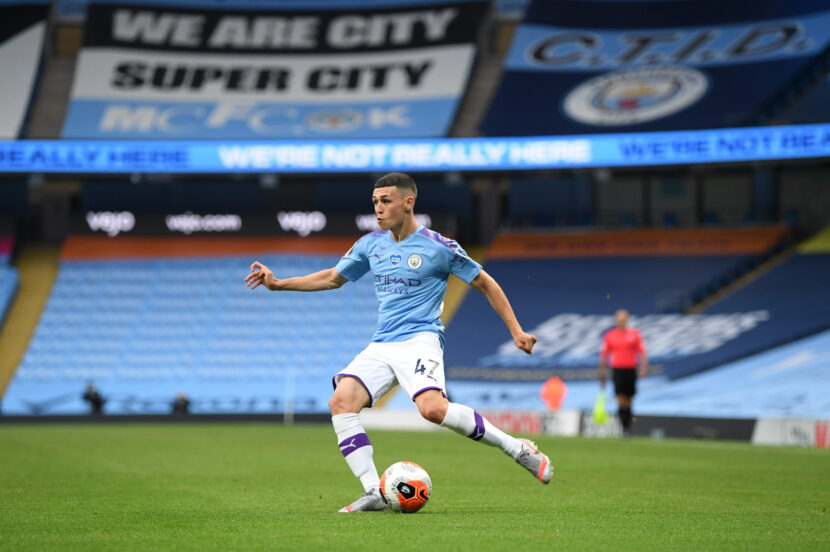 Phil Foden: how City’s ‘Stockport Iniesta’ is finally fulfilling his potential at The Etihad

Manchester City have returned to Premier League football in such devastating form you might be forgiven for thinking they never took a break to begin with.

A slick performance against Arsenal, admittedly aided by a woeful 25 minute showing from David Luiz, saw them come away with a comfortable 3-0 victory, which was then followed by an even more dominant display on Monday evening when the citizens put five past Burnley before the 65-minute mark. While City’s host of world-class talent, the likes of De Bruyne, Mahrez and Sterling have all come backfiring, the performances of one Phil Foden have caught the eyes of spectators more than any of the big names.

Foden was only a substitute in City’s first game, but scored the only goal that David Luiz had no hand in through some smart positioning and a quick finish. Having impressed Guardiola with his short run out against the Gunners, he was part of the starting line up against Burnley and produced a masterful showing on the left-wing. Foden played both playmaker and winger, scoring two and producing the vital pass for another.

His first goal oozed confidence – receiving the ball on the edge of the box from a corner and casually smashing it past Nick Pope’s diving hand into the left corner. He then made the fourth goal, tricking the entirety of the Burnley defence with a superb blind through-ball to Bernardo who had acres of time to slide it through to David Silva in the middle.

His second, and City’s last, was reminiscent of his goal against Arsenal. Once again, the 20-year old’s positioning was superb and, when Gabriel Jesus rolled the ball through to him at the back post, Foden made the finish look easy. Three goals in two is the highest tally for any Premier League player since the restart, but, while some will be celebrating some great performances, others will surely be saying that this is about time.

Lots of talk but little to show

Phil Foden has, for some time now, been regarded as one of the brightest prospects in the Premier League and English football as a whole. Winner of the golden boot in England’s U-17 World Cup win in 2017, Foden’s talent and potential as a midfield creator and goalscorer has earned him the nickname the ‘Stockport Iniesta’ and he has been touted to be one of the future centrepieces of the national team and a defining player of the next generation of footballers.

The nickname is indicative of the stage Foden is at though – he is still in the shadow of comparison to other players. For all this hype, and the talent that he clearly already has, Foden has rarely featured in Pep Guardiola’s side and showed everyone the football player he really is.

Many have become agitated at what seems to be Guardiola’s reluctance to pick Foden, despite his constant praise for the player. The Spaniard has gone as far to say that the youngster is “the most talented player” he has ever seen – something of a statement for a man who has coached the likes of Lionel Messi and Andres Iniesta himself. Yet these statements never seem to materialise in Foden’s selection.

It is perhaps understandable, in a side with such an obscene amount of talent at its disposal, that a young player should miss out on a regular starting spot, but Foden has started only five times from City’s 31 games this season, with the most recent of those coming against Liverpool in his side’s 4-0 thrasing of the Premier Leaue champions; a game in which the playmaker delivered yet another sensational display, netting once whilst also providing an assist for his second of the season.

In his three-year Premier League career, Foden has only ever played three full games, with the third coming against Jurgen Klopp’s men. All the signs are pointing to a player who, with the departure of David Silva set to occur this summer, is ready to take centre stage at The Etihad.

David Silva’s announcement that he would be leaving at the end of the season was accompanied by talk from Guardiola that Foden would be, in some respects, the man to take on the City legend’s mantle. Prior to the restart, there looked to be little evidence that he would be able to do this. But the 100-day break in football has acted as something of a mini preseason and allowed young players to try and wrestle their way into the squad.

Managers, too, are prepared to start them with the pressure of a crowded stadium now gone. Aston Villa forward Keinan Davis was the first example of this, with Dean Smith selecting him in their very first game back, and we have seen it too with Brighton’s Tariq Lamptey and Everton’s Anthony Gordon. Phil Foden looks to have grasped a similar opportunity with both hands, taking advantage of the minutes he has been given to make the biggest impact of almost any player since the restart. We have finally begun to see glimpses of the player Foden has long made out to be.

But just glimpses will not be enough. If Foden is to become as good as David Silva is, he must now use the spot he has earned in the squad to show that he is as good as the world-class talent that populates City’s squad. This lockdown has worked in his favour, and Guardiola’s fear of selecting of him may have evaporated with the pressure of filled stadiums removed and the title chase officially over after Liverpool were crowned champions. Now all Foden has to do is continue this great form he has come into. If he does, comparing him to Iniesta may soon become inadequate.