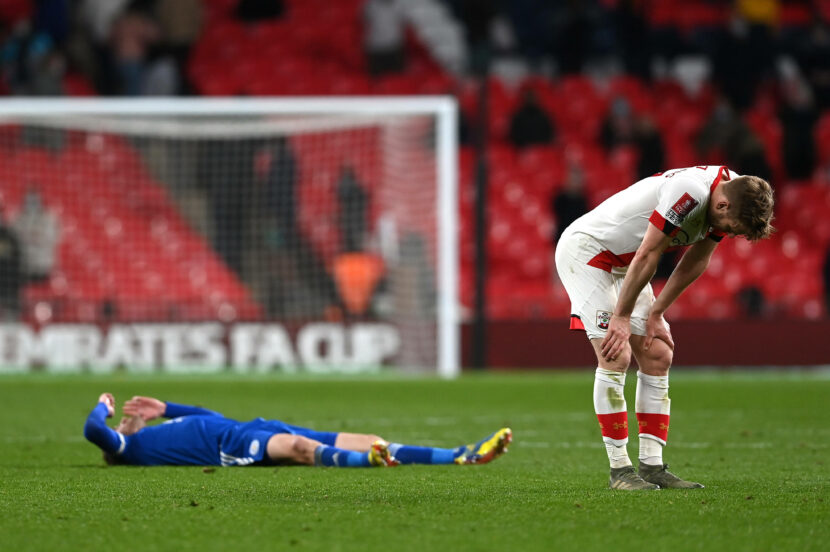 In the biggest match in Southampton’s recent history, they failed to muster a shot on target.

Leicester City booked their place in the FA Cup final with a single goal victory on Sunday evening, barely breaking into second gear in the process. In-form Kelechi Iheanacho’s fortuitous second-half strike sent the Foxes to Wembley and ended any hope of a positive climax to the Saints’ dismal 20/21 campaign.

How spirits have fallen at St Mary’s. A victory over Newcastle on November 9th sent the South Coast club to the top flight summit for the first time since 1988. Five months on and they sit 14th, secure of Premier League survival due only to Fulham’s inability to secure a win. Such has been their underwhelming form that the Saints arrived at Wembley with little fanfare or supporter optimism. Even so, their performance on the big stage would have underwhelmed even the most pessimistic fan.

As Iheanacho wheeled away to celebrate his 55th minute winner, Southampton were still yet to attempt a shot of any kind. A slight rally after falling behind led to nothing more than an off-target Ibrahima Diallo strike to excite the 4000 in-person attendees. Even in the final minute of stoppage time, with Fraser Forster forward in desperation, the usually reliable James Ward-Prowse overhit a final set-piece limply into the arms of the otherwise redundant Kasper Schmeichel. Few supporters expected victory but few could have anticipated such a meek defeat.

Perhaps most frustratingly for those affiliated with the Saints is that Leicester were, by their high standards, distinctly average in their first semi-final since the 80s. One of the dullest Wembley spectacles in recent seasons will be quickly forgotten by any neutrals who lasted the 90 minutes. It will leave a far more lasting impression on a fanbase growing ever more restless with the situation at their stuttering club.

The future of Southampton Football Club is far from clear, irrespective of the fallout from the current Super League controversy. Almost nothing is known of chairman Gao Jisheng, other than an apparent lack of interest in on field matters. The expiring contract of regular starter Ryan Bertrand indicates at least one further key departure in the summer. A season that started with such positivity is drawing to a close with the Saints in a total malaise.

There is now little to play for over the final weeks of the campaign. The Saints will retain their Premier League status for another season but their future ambitions are clouded in uncertainty. Ralph Hassenhuttl’s motivational tactics failed miserably on Sunday, summing up a season of disappointment for those wearing the red and white. At present, the 2021/22 season promises to be a struggle for Southampton.