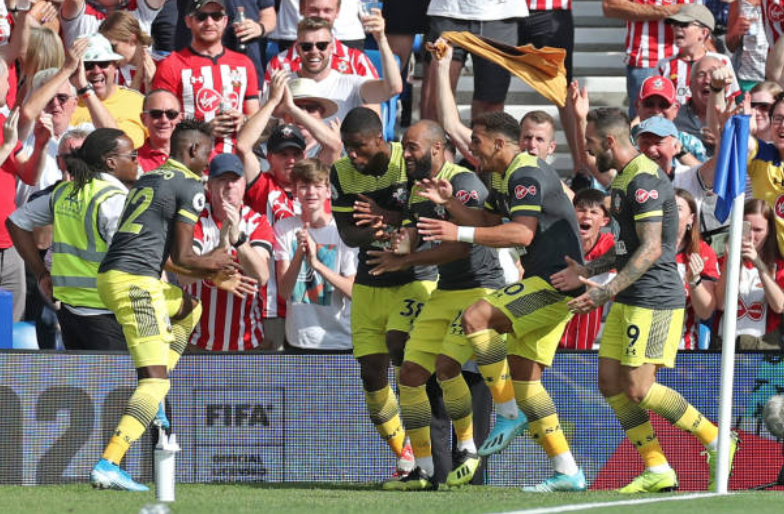 Despite an unimpressive start to their season, the Saints capitalized on their opportunity at the Amex last weekend besting a 10 man Brighton side with brilliant goals from Moussa Djenepo and Nathan Redmond.

A lackluster first half would prove mostly uneventful for both teams; however, Florin Andone’s horror tackle on Yan Valery ensured there would be something to take about at half time. The Romanian’s tackle on the Saint’s defender would see him throw most of his body weight onto Valery and with Kevin Friend not too far away from both players, the match official did not hesitate to produce a red card for the Brighton forward.

Although the first half would see Brighton have the better chances of the match up until Andone’s dismissal, the Seagulls were unable to capitalize on any of their opportunities with Neal Maupay and Martin Montoya both missing headers by narrow margins. Lewis Dunk did break the deadlock from a set-piece yet his header was ruled out by VAR, further complicating things for the home side.

The Saints had no problem capitalizing on their opportunities and the second half saw the visiting side take control of the match. Indeed, shortly after the start of the second half Moussa Dejenpo would come on for Southampton to score what is likely one of the best goals scored so far this season. The curling effort from outside the box was far too much for Mat Ryan who looked badly positioned and as though he was not expecting the strike.

Brighton did not see many more chances for the rest of the match, but Jurgen Locadia did nearly score at the death of the match following a set-piece. Yet it was not to be with the Dutchman’s strike pinging of the post. The Saints however did score at the death with Nathan Redmon tapping in a cross from Boufal, ensuring Southampton’s first win of the season.

Potter’s impressive start to the season was bound to slow down at some point and the Brighton manager claimed beforehand that this was going to be a very difficult match. Southampton finally seemed to find rhythm, and although they were not nearly as potent as they could have been; they did enough to secure their three points.

VAR under question once again

For the second week in a row, VAR has cost Brighton a goal and caused more discussion among football fans across the globe. Lewis Dunk’s first-half header was initially accepted as a goal with the Amex ringing out in celebration along with its players, but just a few moments later those cheers would turn to boos as the goal was ruled out.

Many have made the point that VAR takes the excitement out of scoring a goal especially since one may not know if it will stand or be ruled out by VAR. Although many fans also sing its praises on account of VAR’s ability to make a match truly “fair”, it is clear that many are split on whether VAR is a good idea for the Premier League.

Indeed, discussions will only grow as the season continues, but it looks as though Pandora’s box has been opened and VAR is here to stay. At the moment it is still an unrefined tool, and it will be interesting to see if the FA do anything to address problems as the season goes on.

Southampton back on track

The Saints heavy loss to Burnley and their loss to Liverpool suggested that Brighton would win this match at the Amex. Yet Ralph Hasenhüttl’s side defended extremely well for the entirety of the match and changes made by the manager before and during the match helped Southampton better their South Coast rivals.

It must be said that they were by no means dominant, but their doggedness counts for something, and if the Saint continue performing with the same bravado in coming matches their fortunes could very well change for the better as the season continues. Additionally, new signings like Djenepo could also assist in attack where the Saints have not typically shone in seasons gone by.

Many have credited Brighton’s loss to Andone’s first-half red card, and although this very well could have impacted the match, the Seagulls looked particularly uncreative in this match. Players who had been lively in previous matches such as Neal Maupay looked out of sorts at the Amex, with the forward missing several good chances.

Whatever the case, Brighton’s front line was massively unimpressive with the exception of Leandro Trossard who has continued to impress with his dribbling and crossing ability. With so many options up front, Potter may be struggling to decide on a set front line, but the manager must decide soon as what he tried in this outing was less than effective.

Danny Ings hasn’t really been too impressive since his arrival at St. Mary’s and Nathan Redmond has been consistently inconsistent, much like his team. The introduction of Djenepo and Boufal changed the match for the Saints at the weekend and Ralph Hasenhüttl will likely have some things to consider following this match as the lack of goals in previous outings shows that something needs to change up top.

Whether the trio of Boufal, Redmond and Djenepo is the solution to the Saint’s goal-scoring problem isn’t immediately clear yet and it would not be too surprising to see all these players together on the field again in the near future.

Both teams will be taking on the two teams from Manchester as Brighton travel to the Etihad in an attempt to stop the juggernaut that is Guardiola’s Manchester City. The Saints will host the Red Devils as they reel from a humiliating defeat to Crystal Palace at Old Trafford.